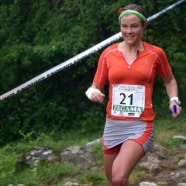 Emelie Forsberg ended up the 2013 skyrunning season on a most dominating note, with an impressive track record, including her skyrunning world cup title, and european titles both for skyrace and ultras. Also relevant were some prestige victories at races like Transvulcania 80k or the Zegama Marathon. She also ran her first 100miler, at the veery demanding Diagonale des Fous, and finished on a great 2nd place.

Emelie Forsberg at Zegama Marathon 2013 on her way to victory.

Over the winter she committed herself to competing in the ski mountaneering worlc cup, a small but highly competitive sport, where many of the top contenders are also world class trail runners, such as Emelie´s Salomon team mate Kilian Jornet.  Unfortunatley, although quite new to the sport elite races, she proved to be highly competitive there as well, but only to find herself handicapped by gastroenteritis once, and by race postponement after that. Hence, she is vowing to come back for next season on a stronger note.

As for skyrunning, her season stated on a sour note at Transvulcania where she was pushed down during the race and fell cutting her hand with the volcanic rocks, which ended her to drop out. Before the Zegama Marathon we shared this conversation with her and her 2013 memories, from skimo and skyrunning, as well as her 2014 objectives.

The day after our interview, at the Zegama Marathon, Emelie took off pushing it hard striving for a second crown. However, her injury,  the antibiotics taken and the fever passed all had combined to sap a bit of her strengh. It became clear when some of her competitors, who also put on a very courageous race, such as Stevie Kremer, Maite Maiora and Kaise Enman, were able to pass her and relegate her to fourth place, out for the podium.

Emelie at the Zegama finish, with Stevie Kremer (1st) and Elisa Desco (3rd)

However, the season has just started and we expect to see much more of Emelie´s great talent at skyrunning all over the world, albeit not anymore in Spain as far as we know at the moment.