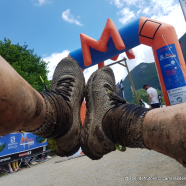 During the weekend of 24th to 26 of May we enjoying all the events of the Salomon GORE-TEX MaXi-Race 2019. A full weekend of events enclosed on the MaXi Race World, six events around the world that are the perfect opportunity to discover new destinations, following an unabated passion for trail running. We had the opportunity this weekend of enjoying Maxi-Race Annecy, but you can discover also Sicily, Ecuador, China, Madeira and South Africa.

With more than eleven events in 2019, the Short-Race of the Maxi-Race Annecy was the first stage of the World Mountain Running Association World Cup and the Marathon-Race was part of the Golden Trail National Series in France.

Let’s begin with the recent burnt official video from this 2019 Maxi-Race Annecy. Enjoy it!!!

Let’s begin with my own experience about this wonderful weekend. In this 2019 I have a very clear goal, to run the 170km and 10,000D+ of the Ultra Trail Montblanc, in order to achieve this challenge I planned to participated in some races over the world. The first one was the 45k of PatagoniaRun (link in Spanish), then the 68k of NafarroaExtreme, and the third stage was the Marathon-Race in Maxi-Race Annecy this weekend. Next race will be the 102k of Tenerife Blue Trail from Alpinultras Circuit link in Spanish).

We arrived at Annecy on Friday 24th at 5pm after a delay in our plane of more than 2 hours. Since the first race of the weekend (the Short-Race included in the WMRA World Cup) was starting at 7pm we were not able to do check in in hotel and we were straight onto the start line. There we had the opportunity to see the best runners where Andrew Douglas and Lucy Wambui got the lead of the WMRA World cup till now. 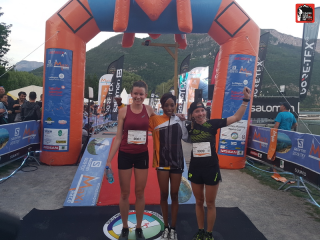 After the Short-Race we went to have some dinner and then to the have some rest before the Ultra-Race and Maxi-Race started. We were following the race until the the first runners of the Ultra-Race arrived at the finish line, so at 00:00 am the Ultra-Race started with François D’haene and Jason Schalrb as favorites, however François had problem in his ankle and had to abandon. Jason Schalrb and the Spaniard Unai Dorronsoro to the head of the race and Unai was able to leave Jason behind to get the victory of the Ultra-Race. In the women side the victory was for the Hungarian Ildiko Wermescher.

In the Maxi-Race, the Marion Delespierre was the winner in the women race and the french and favorite Michel Lanne won after the 82km after leading the race almost from the beginning.

But let’s go with my race, the Marathon-Race, 41kms and D+2500. At 5 pm I was able to go to bed and sleep till 10 pm, yes!! we love to come to cover and run the races, but “All that glitters is not gold” and we have to sacrifice some rest from time to time in order to be able to describe everything to you. After some dinner (thanks Memphis!) I went to bed again till 3 am where I had to wake up and go to the bus line, the star line of this races is in Doussard and we have about 30 minutes of bus, of course the organization offers a bus line for participants. The stuff that I chose to run is: 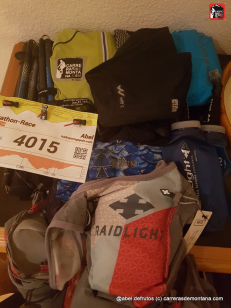 Starting at Doussardst the Marathon-Race shares the latest 41 kilometers of the Ultra-Race and the Maxi-Race, it also share the second stage for the XXL-Maxi-Race and the XL-Maxi-Race, so at 5 am all the runners (more than 1500) were in the front line, there I can meet a couple of Spanish women from Castellón and we chat for a while before the race started. As there are more than 1500 runners the start is staggered and ours is launched later than 5:30 am.

First four kilometers are around Doussard, flat terrain and very easy but I decide not to go very fast since there are more than 40 kilometers to go and I do not want to fail at the very last as it happened in Nafarroa, also, my mind is over the 102k of Tenerife Blue Trail in a couple of weeks and I do not want to pass away. After the running about 4 kilometers the first ascend comes, almost 6 kilometers with about 600 of ascent, here there was a problem that the organization should fix in next years (from what I know this has been reported to them and they are conscious of this, so I am pretty sure they will fix it), but the number of people participating is very high and though they prepared entry and starting line up in order of bib numbers (allocated according to ITRA ranking) when the ascent start the path is very narrow and everyone had nearly to stop so we couldn’t run too much until first top, we were stopped like in the metro queue as you can see in the photo below for several minutes as it was impossible to move on.

About kilometer 10, we have the first water station, note that there are only two (one in this kilometer with just liquid) and another one in kilometer 23, this one is really good, tones of food, like soup, pizza, fruit, coffee, chocolate, bread, bars, etc. I found the number of refreshments points a bit short, but it is true that this is well noted in the rules and that every runner should take their own food in the bag-pack so this should not be a problem for any of the runners, though I would have appreciate one more at least.

We continuously going up to the top of the summit at Pas De L’Aulps in 18,5km and 1,500 m of ascent, I am quite conservative but at the same time gaining positions and the views at this point are awesome, reaching the pass, we get another bottle neck, the pass is very narrow again and we need some ropes to move on, people pass very slow and only 1 person each, so we have to wait for sometime there, the Garmin says that we were stopped there more than 15 minutes!!!!!!, I take the opportunity to take some photos as I love the place and the views. 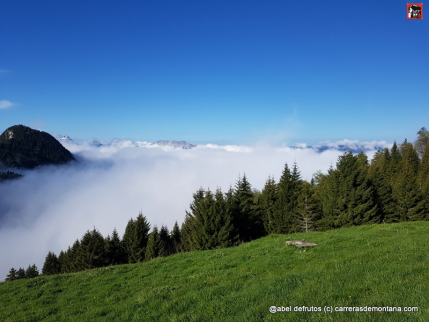 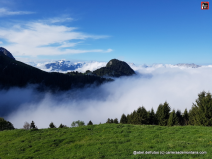 We reach the top, I pass through the bottle neck and we start going downhill, almost 1,000 m of vertical descent in 5-6 kilometers, I like going fast there, so I pass many runners during the downhill, and actually I feel my quads hurting, so it come to my mind the last part of the course in which we have to uphill again and thinking about how I will be doing the last 8 kilometers down. I reach the main refreshment point in which I just eat whatever I can, things are delicious, and as I do not have too much food with me I just try to recover there as much as possible and test my stomach which is normally one of my bads on the ultra races.

We have about 6kms or so to get the last top, the Plateforme Telepherique, I fell well and I take a gel at the middle of the ascent, going up easy I still pass some runners, so I am starting to think that I can do a good descent in the last 9kms, enjoying the ascent in the middle of the mud I get to the top, the views there are spectacular again, we can see the Annecy Lake and mostly all the village, I stop there and take some pictures, at that moment I do not think about the race, I would like to stay there forever,

Now, we have almost 9 kilometers till the end, the day before, while Ultra-Race and Maxi-Race were running up, Ana and I calculate 45 minutes or so to do that part for the top leaders, so in my mind I think I can make it in 1 hour, I start the go down and I feel my legs perfect, the path is full of mud and it is difficult to run (exactly what I like!) so I decide to go down like “a banzai“, the result is that I pass more than 120 runners!!!!! and it takes to me about 1 hour to make it (almost 10 minutes ahead of what the livetrail app was suggesting), so I just arrived to the finish line very, very happy. The last kilometer running through the deck of the lake is wonderful and I enjoy it very much, just thinking on the next race, the Tenerife Blue Trail from Alpinultras circuit which will be the fourth race of the list, 102kms and 6600D+, going up from the beach to almost the top of the Teide, from 0 to 3500 of altitude. There we go!!!!

I really liked the Maxi-Race environment, the Maxi-Race Village opened the full weekend that you can enjoy food, drinks, shopping and also the lake, unfortunately we did not see too many Spaniards, looks like only about 35 registered, I really encourage everybody to travel to Annecy and try this Maxi-Race since you have more than 11 races to try, so it is a very good opportunity for the runner to go with the family and enjoy the full weekend there. Next Maxi-Race, Sicily Etna Trail July 26-28.

*** MAXI RACE ANNECY ORGANIZATION LAUNCH DOCUMENT REGARDING THE BOTTLENECKS DURING THE RACE, PLEASE CHECK LINK BELOW