The Trail World Championships kicked off at 6am with a sprint, round the track at Universitat Jaume I. Luis Alberto seemed to be leading the sprint! We hope that’s a good sign!

Runners from 49 countries gathered in Castellón, to see who will be crowned World Champions.

At the Useres checkpoint at 31k Zach Miller was just ahead of Brit Tom Evans. But close on his heels were Sylvain Court and Seb Spehler of France.

Tirtha Tamang of Nepal was in fifth. And Luis Alberto was in 7th and looking very strong.

In the women’s race Ragna Debats led at this point, with Amandine Ferrato in second and Azara Garcia third.

And as the race started to heat up, so did the weather.

At Atzeneta (the halfway point) Miller remained in the lead, with Evans still in second and Court was up to third. Luis Alberto had moved up to fourth by this point, just a couple of minutes behind the leaders, and he looked like he was closing.

During the second half of the race Luis Alberto continued to move up the field, looking ominously comfortable. But as the race started to unfold it would be the battle for 2nd and 3rd which proved to be the biggest competition.

At Vistabella (62k) Miller and Luis Alberto remained together, with Tom Evans 10 minutes behind, Brit Jon Albon had moved up to 4th and there were several French runners not far behind. In the women’s race Ragna Debats was starting to stretch her lead out, with Ferrato, Arenas, Canes, Mougel and Mayora all going strong in the top 10.

But the last 20k was where it all started to bite! Luis Alberto showed his class by stretching his lead out to an unsurpassable level, while the Spaniard Cristofer Clemente had been steadily moving through the ranks and was by now in second. Evans and Clemente battled it out for second throughout the final stages.

Luis claimed his third Trail World Championship title in his indominatable style, reaching the finish line completely spent! Clemente claimed second and Evans, in an incredible performance for somebody so relatively new to the sport, took the bronze. Jon Albon claimed 4th place, showing his skyrunning credentials, and Ludovic Pommeret was 5th.

Debats’s lead proved too much for any women to challenge in the last 20k. She maintained her dominance and stretched her lead out to 15 minutes. The women’s top 10 changed constantly in the last sections, but Spaniard Laia Canes emerged as silver medallist and Claire Mougel from France took the bronze. Gemma Arenas of Spain was 4th and her teammate Maite Mayora finished 5th.

Here’s some information about the race and the favourites:

TWC 2018 race is limited to runners selected by their federation or national association member of IAU. However, two other races at the event are open to all runners: The MIM ”Marató y Mitja” (59k/D+3,430 Start 7AM-May 12th) and the CSP ”Ultra Castelló Penyagolosa” (107k/D+5,670m Start 0AM-May 12th). Follow it all live here with us at our website in english or in spanish at CARRERASDEMONTANA.COM. We shall also be tweeting for you from the race course at @trailrunningesp. Watch below 2017 Penyagolosa trail start as we taped it here for you.

By Kirsty Reade and Mayayo.

51 countries will be represented at the Trail World Championships. Countries can field up to 6 male and 6 female athletes and there are individual as well as team competitions. In the team competition the first 3 male and female runners from a country will count, with the competition decided on accumulated finish times.

Previous results at TWC 80km Peneda Geres 80km and Badia Prataglia 50km: France and Spain fought it off kast yar in Italy for the third time at the top of all categories. And for the third time France came out ahead as overall medal winner at Italy´s 50km, yet this time by the slightest of margins. Among the 12 medals possible, four went to France, four to Spain and four to the rest of the world. The french got two golds and two silvers, beating spaniards two golds, one silver and one bronze. 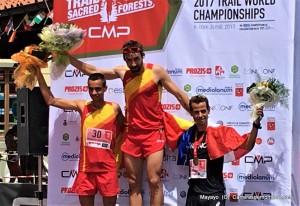 However,  distance now changes from 50k to the previous 80km, which saw this results back in Portugal 2016

The race will start at 6am on May 12th in Castellon. Runners will then slowly climb towards the finish 83km away in Sant Joan Penyagolosa. There are several climbs of 200 – 300 metres in the first half of the race, followed by some bigger climbs in the second half. From 40km to 70km the race climbs from 400m to 1400m with some big ups and downs. The winners are expected in around 8 hours.

Participation conditions: The 2018 Trail World Championships are open to runners selected by their federation or national association member of IAU. Herebelow you may find a selection of teams among the over 40 to fight at Penyagolosa. The top medal contenders seem to be Spain, France, USA and Great Britain, with Portugal, Italy and Switzerland also as interesting alternatives. 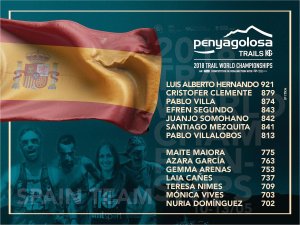 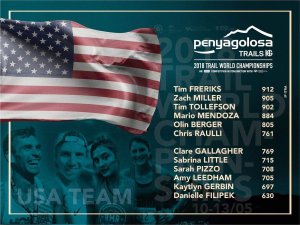 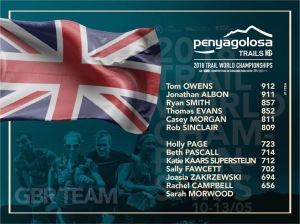 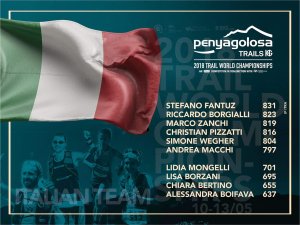 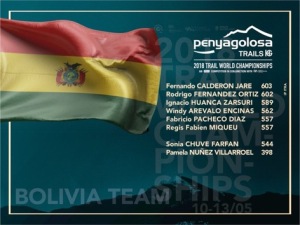 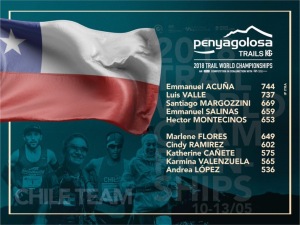 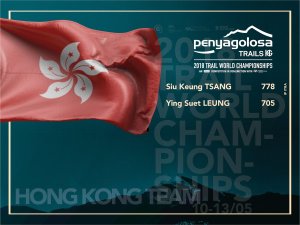 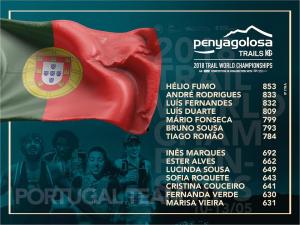 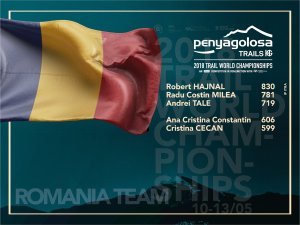 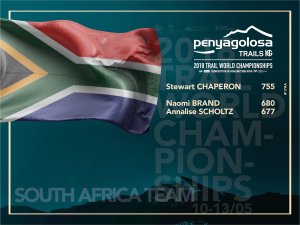 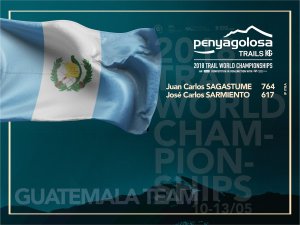 Who is who within TWC organization:  In collaboration with IAU for the Trail World Championships, ITRA acts as technical partnership for 3 years. Today it is impossible to separate its expert health and security assessment from a such event.

ITRA has opened an international discussion with the trail running community to discover how the community feels that the next Trail Worl Championships (2020, 2021 and beyond) should be organised. ITRA is listening to different trail runners’ opinions on many subjects: the race’s number, the distance,  the event frequency, the event form (many races in a single event), the type of route or the qualification process (selection by federation, wild card, open to all etc).

An international committee of athletes was created and tasked with considering these opinions and recommending the best format for the future Trail World Championships.

The sharing of responsibilities between IAU and ITRA has been clarified and effective since 2016 Trail World Championships in Portugal. IAU is in charge of all administrative, financial, accomodation and transport issues. ITRA is in charge of technical organization, communication and the QUARTZ Program, which offers a unique and innovative health monitoring platform, aimed at protecting runners’ health and contributing to doping-free sport.

Next TWC to be held at Portugal over 50km on June 8th at Trilhos dos Abutres. Further info here.