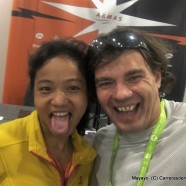 MIRA RAI, SALOMON RUNNING, FROM NEPAL TO THE WORLD: Video interview by Mayayo at Transvulcania.

Mira Rai is a nepalese runner currently in the Salomon Running squad. She took over the international peloton back in 2015 at the Skyrunners world series when she achieved a second place at the hypertechnical  Tromso Skyrace over 44km and then went on to another silver at the Ultra Pirineu over 109km, a result that was woth no less than 800 ITRA points.

Unfortunately, the start of the 2016 season did not bode as well, since a stress facture has slowed her down. At La Palma we chatted with her about her trajectory and her pure “joy of running”, a different and most positive attitude that has proved to be truly inspirational to many runners from all over the world.