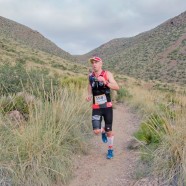 Trail running in Spain becomes a true haven por many a central and northen european runner come winter. In this case, scot Casey Morgan already sums up quite a track record at spanish events, ranging from Gran Trail Peñalara to Transmallorca Run, the Transgrancanaria or this most recent win at the inaugural edition of UltraMaratón Costa Almería 90km.

In fact, Casey was moving on there, just back from his recent team race over 100k at Hong Kong´s Oxfam Trail Walker, where his team with Pau Capell and Yeray Durán, alongside frenchman Julian Chorier ended up third. So, let us see this new andalusian winter ultra trail with the eyes of its first ever winner. Congrats! 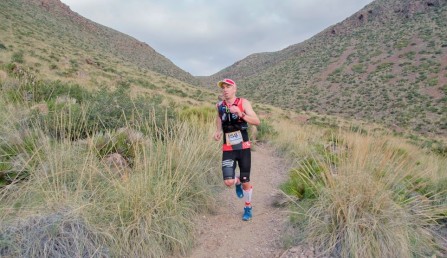 With the Hong Kong Trailwalker still in my legs I made the trip to the south of Spain for the Ultra maraton costa de Almeria. I wouldn’t normally race 2 long races so close together but I had been invited by good friends and if nothing else it was a good chance to escape the miserable conditions we’ve been having in the UK. 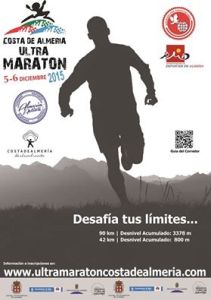 The race itself was 90km starting from Agua Amarga and finishing in Almeria passing through the stunning national park of Cabo de Gata along the way. At 7am in Agua Amarga the air was cold and sunrise was still an hour away as the race got underway. I was happy to get moving just to warm up. On the first climb I settled into a group with 4 or 5 other runners at the head of the field and was happy just to go with the pace while it was still dark. I really had no idea what to expect from my legs so didn’t want to push too hard too soon.

I stayed with the group until the first checkpoint at 13km at which point the sun was coming up. I got a real boost from the sunrise lighting up the desert landscape and decided to start pushing on. I opened up the gap fairly quickly and it continued to grow as we made our way up over the biggest climb of the day. The scenery here is pretty spectacular, made famous by movies like Indiana Jones and the last crusade and Lawrence of Arabia as well as many westerns.

I was alone from this point onwards until I started to catch the marathon runners who would start further along the course at 10am. I was definitely feeling the effects of Hong Kong with no zip in my legs and just a real lack of energy. I met my friends Antonio and Mar at the checkpoint at 45km and this gave me a much needed morale boost.

They gave me my gels and sent me on my way. After another 15km of climbs and descents I arrived at the coast with 30km of flat to the finish, it sounded like a very long way in my mind! I had to really focus to keep a decent pace and was beginning to hurt a lot, my quads were gone. 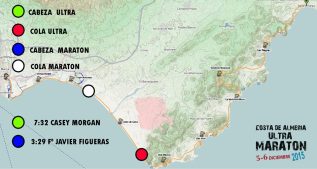 Casey on the lead at the organizers billboard after the first 7h30.

The checkpoint at 75km came just at the right moment, a chance to refuel and a welcome boost from seeing my friends. I knew I could keep it together for another 15km to the finish and I still had something in reserve if I was dragged into a race. Fortunately the last 15km were pretty uneventful but a sufferfest all the same! It was great to win and to share it with the people who had helped me along the way.

Massive thanks to Antonio for his organisational skills and all of the Albaladejo family for a brilliant time in Almeria.
Onwards and Upwards for 2016!