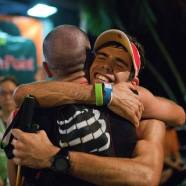 The recent Oxfam 100km at Hong Kong saw a european team arrive as one of the favorites. It was made up of spaniards Pau Capell and Yeray Durán, alongside frenchman Julian Chorier and the scot Casey Morgan.

It is precisely from Casey that we are able to offer you his personal race report, for a quite adventourous race, were after taking a 9km “extra” lap at the beginning, the team then went on to achieve 3nd position overall. Well done, mates! 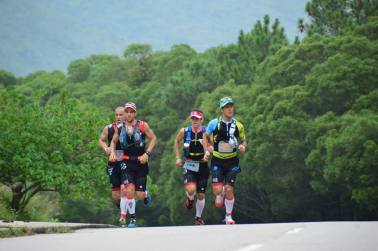 It was a video of UTMB 2011 that inspired me to try Ultra trail running, the video featured Kilian Jornet, Iker Karrera and Miguel Heras, all running together and working as a team. I thought it looked amazing, 3 guys in the same team uniform all tapping out the same rhythm across stunning landscapes covering crazy distances, I knew I had to try it.

Fast forward 4 years and I find myself in Hong Kong with 3 of the best ultra trail runners in the world, Julien Chorier, Yeray Duran and Pau Capell.  Together we made up the Compressport International team for the Hong Kong Trailwalker 100km.  The race covers 100km across the stunning mountains of the new territories and the rules dictate that we must stay together as a team of 4 from start to finish, not easy in this company!

On the stroke of 8.30am we were off but not as quickly as the Nepali team. I´ve never seen a team start a race so quickly, literally sprinting for the first 300m, it was crazy. We just settled into our own pace and after about a km we took the lead from an already disjointed looking Nepali team. At the 3km point we came to a junction which was manned by police and race officials, they directed us off the road and onto a trail where we continued to follow the pink and silver markers of the race for the next 6km. At just under 9km with 300m+ we reached the end of the trail and came back out onto the main road right back at the start line.

Everyone seemed surprised and confused as to why we were there and nobody could tell us where we were supposed to go, we wasted a lot of time going backwards and forwards trying to work out what had happened but none of the race officials wanted to know.

Eventually we discovered that we shouldn’t have been sent down the trail at the 3km point so god only knows why there were race markers down there (someone mentioned afterwards that they were for another race on the same day using the same markers but i don’t know for sure).

My GPS file shows that we set off from the start again almost 55 minutes behind the field, we were furious and it was soul destroying to think we had flown all that way for something so ridiculous to happen. We reached the 3km point again where a few choice words were exchanged and that seemed to settle us down knowing now that we were back on the course.

We decided just to do what we could and set about the task of reeling in as many teams as possible.
I was really proud of the way we pulled together and didn’t let the setback consume our thoughts. We just worked hard and helped one another as and when required.I was so impressed with the strength of Yeray and Pau. Julien was having a tough day and those guys were unbelievable in helping him on the climbs. Pau at only 24 years old has a huge future in the sport.

.
As the day went on we caught and passed team after team spurred on by our awesome support crew in every checkpoint. We were so lucky to have amazing support in all 9 checkpoints who refilled our water and gave each of us our preferred nutrition to see us through. We even had support runners at a couple of points who would refuel us as we ran. I can’t thank the support crew enough. Eventually we found ourselves in 3rd position but we just didn’t have enough to catch 1st and 2nd.

The finish line was easily my favourite moment of any race I’ve ever done. To share that moment with those 3 guys and our support team after suffering together all day was just unbelievable. It wasn’t the result we were hoping for but after the events at the start it felt as good as a win and so much better than I ever imagined when I watched that video in 2011. Long live Team Xempower Compressport!!!!