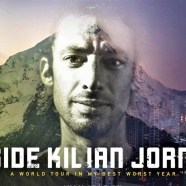 INSIDE KILIAN JORNET: «THE WORST BEST YEAR OF MY LIFE» KILIAN’S JORNET DOCUMENTARY IN AMAZON PRIME.

Posted by hekruca on November 22, 2020 in trail running spain | Leave a comment

INSIDE KILIAN JORNET: “Worst Best Year of My Life” Documentary Kilian Jornet already on Amazon Prime. The documentary premiered as such last 13FEB, being an exclusive for Rakuten TV Today, we already have the same on a more popular platform in Spain such as Amazon Prime.

It is a 41-minute documentary, showing Jornet off his usual stage. Recorded from behind the scenes, it follows the world promotional tour carried out by the athlete last year. The film also captures an unusual year in Kilian Jornet’s life, where he faced two injuries and managed to complete some sports projects he had had in mind for a long time in addition to receiving the best news: their future fatherhood.

On a frantic tour of Asia, the United States and Europe, Kilian Jornet shows off his less common face. The day-to-day life of an elite athlete beyond the mountains. Discovering his most intimate side, Kilian reflects on a 2018 marked by injuries, his quest for the balance between competition and his personal projects and also on the news of the arrival of his first daughter.
“Inside Kilian is a different documentary than we’ve done so far, as we go beyond the mountain to teach a little bit everything we do as elite athletes. He also reviews a year that was very special to me with all his good and bad times,” explained Kilian Jornet.

The documentary is a production of Lymbus, which already signs other titles such as “Path to Everest”, a film that captures Kilian Jornet’s double rise at Everest and which became one of the 50 most watched films in Spain in 2018. The film is currently also available on VOD platforms such as Vimeo or Amazon Prime.