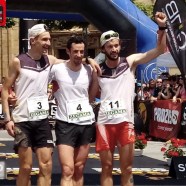 GOLDEN TRAIL WORLD SERIES 2020: CANCELLED DUE COVID-19 OUTBREAK. NEXT STEPS ON MAY20

The Golden Trail World Series 2020 have been cancelled due the COVID-19 outbreak, The third edition that was going to held 7 events: Zegama Aizkorri, Mont Blanc Marathon, Sierre Zinal; Dolomyths run, Ring of Steall y Pikes Peak, to finish with a final in the K42 Patagonia has to re-schedule and look ahead.

Same as the 22th Mountain Running WMRA Wolrd Cup did last week, the Golden Trail World Series has decided to leave 2020 pass away. Let’s see below the official statement and next steps. In this video we can see Kilian Jornet breaking record on Sierre Zinal’s race,

Due to the worldwide health crisis, the Golden Trail World Series (GTWS), the trail running circuit that launched in 2018 and immediately attracted top trail running talents from around the world, has been forced it make changes to its 2020 schedule and format.

The top priority of the GTWS is the health of everyone involved in the races—from elite and amateur competitors to the staff, volunteers and spectators in attendance. In recent weeks, the series has been working closely with organizers of the six races scheduled to be part of the 2020 series in an effort to find the best solution. Like the entire sports world, trail running has been forced to adjust plans rapidly in these uncertain times. A number of races have been cancelled or rescheduled, and athletes and sponsors have been thrust into a wait-and-see approach.

Already, two races on the GTWS—Zegama-Aizkorri in Spain and the Marathon du Mont-Blanc in Chamonix, France—have been cancelled for 2020. On May 20, the Dolomyth’s Run in Italy (originally scheduled for July 19) will announce their decision for their race while Sierre-Zinal in Switzerland has been postponed from its normal August date until September 13th. The last two races, Pikes Peak in Colorado and the Ring of Steall in Scotland, could still take place. However, the borders to those two countries are currently closed to international athletes.

Unfortunately, for the stated reasons above, it will not be possible to organize the 2020 GTWS as it was originally planned. The GTWS 2020 is therefore postponed to 2021including the final in Argentina.
However, in order to continue to promote the elite professionals of trail running and to celebrate the sport in a global manner with participants and fans, the organizers of the GTWS have constructed a new format for the 2020 season.

This updated plan will be announced on May 28 and has been designed so that athletes can rewarded for their performance and also to provide competition and drama right up until runners cross the finish line. The Golden Trail World Series expects to write this new page in trail running history during the final week in October. Of course, the plans currently in motion are based on the condition that governments authorize trail running races beginning in September and international travel restrictions are been lifted before October.

More information will be announced on 28th May on