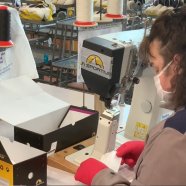 LA SPORTIVA MAKES 55.000 MASKS FOR TRENTO CIVIL DEFENSE. More to follow after initial batch. The company converts part of its production line to make laboratory coats and masks for the Protezione Civile (Civil defense) of Trento. The Coronavirus emergency continues and  Confindustria Trento, at the request of the President Manzana, calls on the Trentino textile industries to make an effort to restructure production in order to cope with the lack of health care equipment in the region, such as certified laboratory coats and masks..

La Sportiva, after having totally stopped production lines already a week before the Ministerial decree that imposed the closure of all factories other than those producing primary necessity goods and not linked to Italy’s production chain, accepts the President’s proposal reconverting part of the machinery of the production plant, designed for the cutting and stitching of materials such as leather and rubber for the prodution of masks and laboratory coats at the service of the Protezione Civile (Civil defense) of Trento. 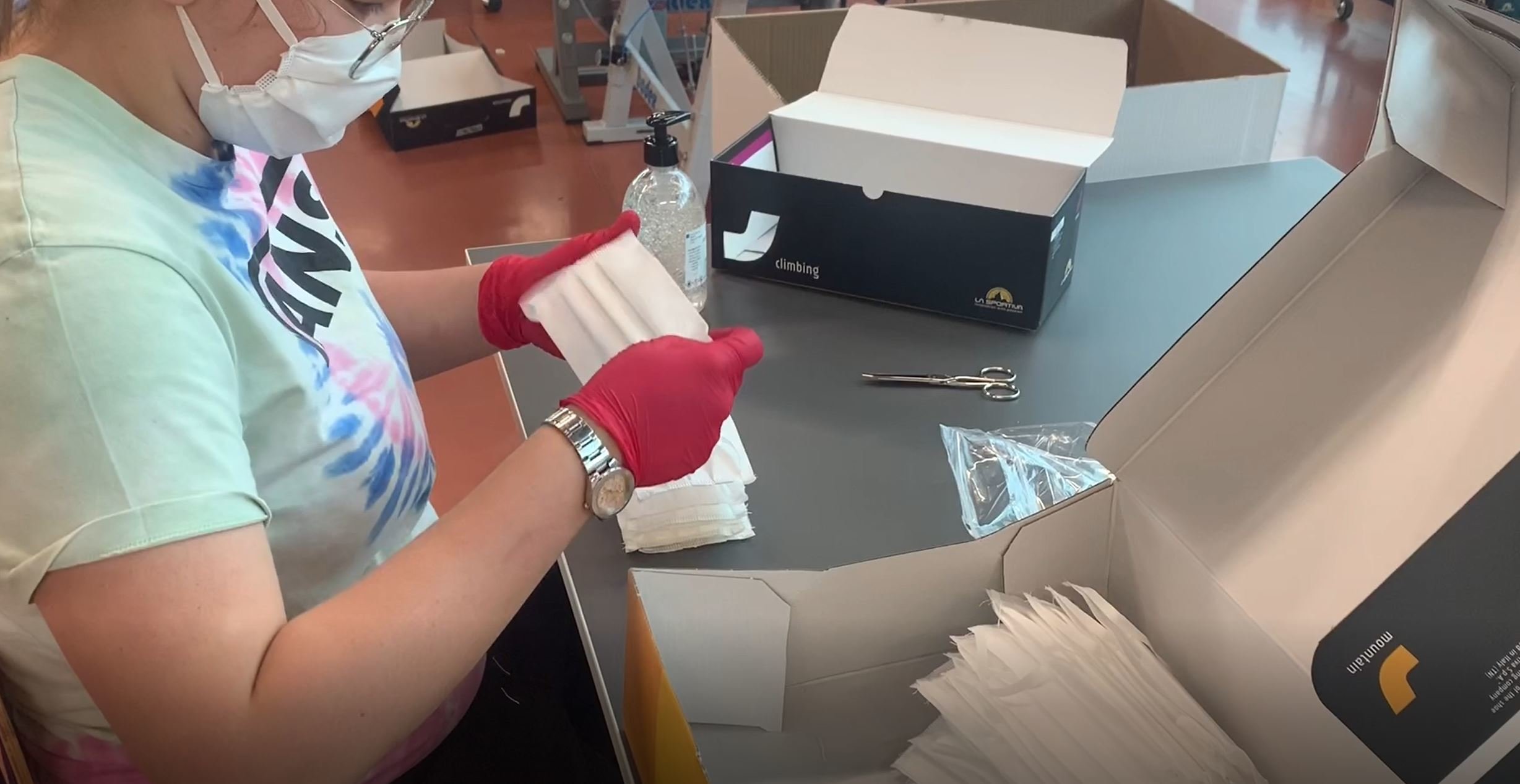 “The first prototypes were made last Friday and this week, thanks to the technical fabrics supplied by the Trentino companies Vagotex and Texbond, production is underway for the creation of an initial 1000 pieces per day with the objective, once full production capacity has been reached, of manufacturing 3000 pieces per day. Currently in the factory in Ziano di Fiemme which normally employs 369 workers and which produces 2000 pairs of shoes per day, 8 people have been called in from the layoffs, including workers and R&D technicians to create the prototypes of the masks compliant with the standards requested by the Istituto Superiore della Sanità of Turin (Higher Health Institute of Turin). The production that is already undway, now only awaits the official certification which Dr. Cipriani of the Allergo System of Rovereto is handling, to be definitively approved so that the company can proceed with the distribution through the channels of the Allergo System prime contractor.

“We have been producing footwear in Trentino since 1928, always feeling a strong social responsibility towards an entire community that makes solidarity and mutual aid a fundamental characteristic. – says Lorenzo Delladio CEO & President of La Sportiva – With a great sense of responsibility we first contributed to the collective effort to contain the contagion, by closing our production sites in advance: now we are called on to commit ourselves to facing the second phase of the emergency, to do this we have equipped ourselves with the adequate raw materials to be able to produce a first batch of 55,000 masks that will go to the Civil Protection of Trento, through the Allergo System of Rovereto. 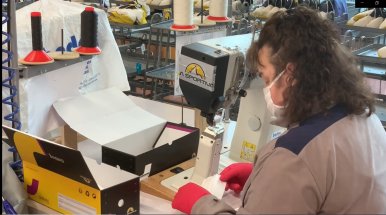 At the same time, we are trying to independently certify other materials in order to produce laboratory coats and other protective components and then move on to an industrialized production that will allow, in the very short time, to reach much more important daily productions. Clearly by converting more machinery we will gradually be able to bring more employees back to the plant. In the hope that this will help to secure the hundreds of health workers who operate in the Trentino area and who today need all our support. United albeit divided, we will climb this mountain too, that’s what I said to my collaborators at the beginning of the emergency and it is the message I want to give today to all those who are at the front lines to fight this battle. La Sportiva is there and supports you. ”

And support for Trentino healthcare has already arrived in the form of a donation thanks to the 50,000 euros donated at the beginning of the emergency to the intensive care units of Trento and Rovereto on a special bank account set up by Confindustria Trento.

The next few hours will be decisive for obtaining the official certification of protective devices: Delladio says he is confident that the Istituto Superiore della Sanità will work quickly in this direction. 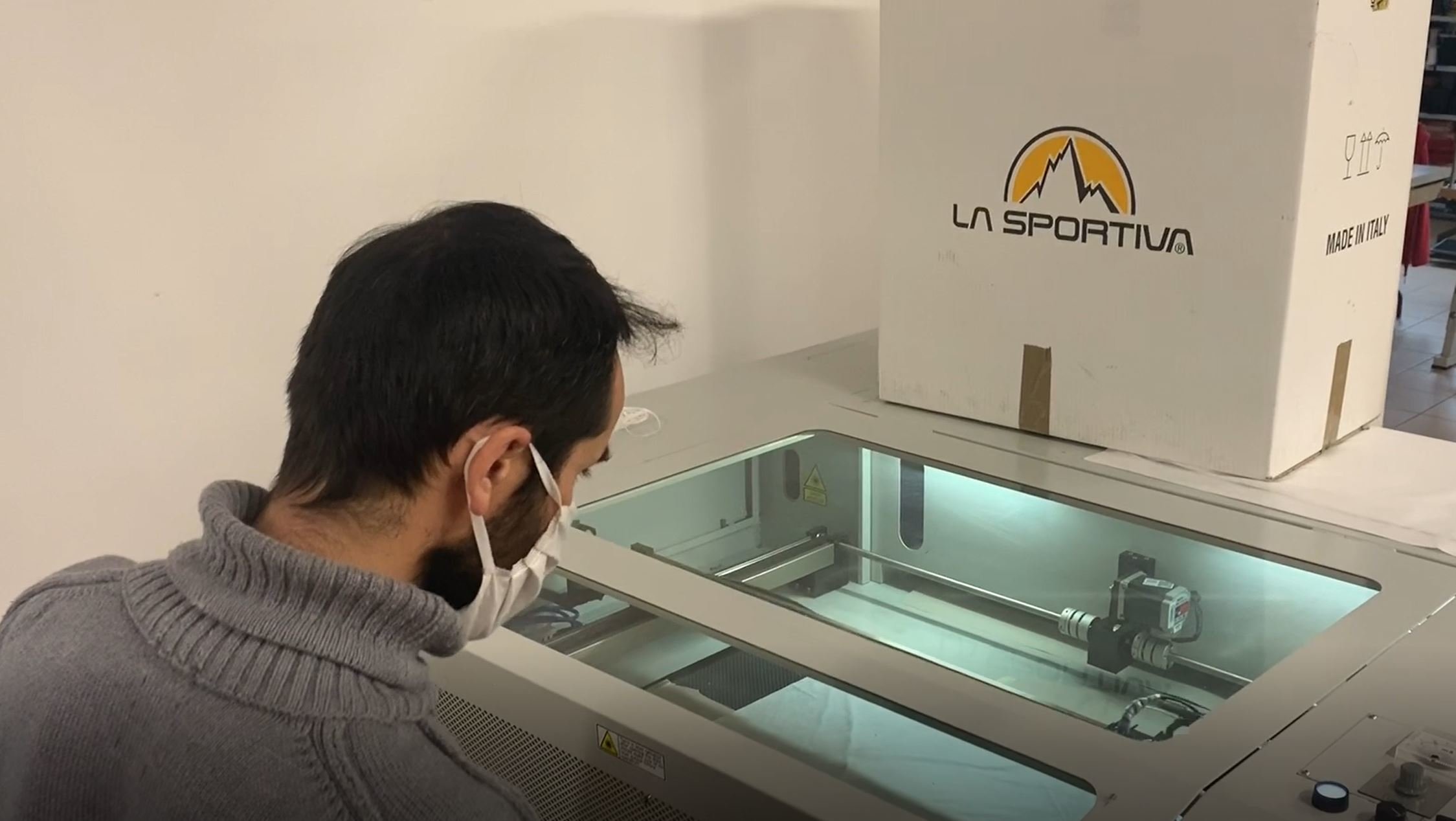 ← TRANSVULCANIA 2020 POSTPONED: THE TRANSVULCANIA WEEK MOVES OUT TO THE WEEK OF 09/26 TO 10/03 MICHEL POLETTI RESIGNS AS ITRA PRESIDENT, TO FOCUS UPON MANAGEMENT OF UTMB AND ULTRA TRAIL WORLD TOUR. →