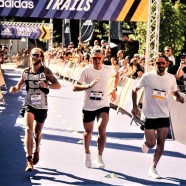 ADIDAS INFINITE TRAILS team relays has crowned Mityaev, Hernando and Olson as World Champions 2019. The dream team dominated throughout the race for the tripartite trophy of the new team relay world championships. The German top team around Anton Palzer, Benjamin Bublak and Janosch Kowalczyc placed second on the podium and therefore claim the title of runner-up. Bronze was won by the Spanish CARRERASDEMONTANA  team with Raúl Criado, Manuel Anguita and Ruben Vigil despite their loosing 29min due to a course mistake.

After a battle against the sweltering heat of more than 30°C today, 127km and 7600vm, Dmitry Mityaev (RUS) and Luis Alberto Hernando (ESP) joined their team mate and runner of the final and decisive loop, Timothy Olson (USA) for the final loop around the scenic village center of Bad Hofgastein.  The Dream team formed by Russian Ultraspecialist Dmitry Mityaev, triple world champion Luis Alberto Hernando and double Western States Endurance Run 100 winner Timothy Olson showed an impressive joint effort today, covering the 127km and 7600vm of the adidas INFINITE TRAILS 2019 in 13:04:27. This collective push earned them the first of three gold medals at the innovative team relay event. The two other categories Women and Mixed are expected in the evening.

Mityaev won the early morning battle with Palzer  The first loop was opened by Mityaev at 4:00 am with Palzer starting 48 seconds after him into the 25km/1900vm up to the highest point on the Gamskarkogel. Palzer started strong and surpassed his Russian colleague after 4,5km. Subsequently, the vertical specialist battled hard and long and at a point had a plus of over 2 minutes on Mityaev. But the Russian ultrarunner kept pushing and on the downhill part and around 20km the lead fell to him. From then onwards, he increased his lead and ended the first part of the world championships race on the first place with a plus of 2:51 minutes on the Mountain Running World Cup silver medal holder Palzer and a time of 2:32:50. Martin Anthamatten from Switzerland crossed the finish line as the third runner of the race.
“I am very happy with the result”, Mityaev beamed at the finish area, “I never expected to be able to keep up with Anton since this route would definitely be one for him while I specialize more on longer distances. But when I realized that I could beat him, I started pushing and now I am here”, the first Russian to hold a podium ranking of the UTMB-TDS race summed up.

Hernando dominated second loop from the start: Triple world champion Luis Alberto Hernando (ESP) was the one taking on the challenge of the ultradistance of Loop 2 (60km/3600vm). The trail running legend dominated the race all the way from Bad Hofgastein to the Zittrauer Tisch, the highest point of the adidas INFINITE TRAILS 2019 race at 2463m. Although the Chinese Luo Tao started the race at an incredible pace and could stay on Hernando´s heels and at one point even cut his leeway of about 10 minutes in half, the Spaniard would not ease up, also on the downhill part. So, after 6:28:06 hours he could send off his team mate Olson with a lead of 27:27 minutes on the Tao´s and Anthamatten´s team mate Byongwon Park (KOR). Benjamin Bublak, racing for the TERREX Dudes, together with Palzer and Janosch Kowalczyk, ran a beautifully consistent Loop 2 and saved some of his strength right up until the last kilometers of the 60K loop. After an exciting duel on the last part of the race, Bublak crossed the finish line only 62 seconds after Tao, with +28:29 minutes on the leading team. The spanish team CARRERASDEMONTANA was put back 29 minutes due to a mistake on the course by Manuel Anguita, but still managed to part 10 minutes after Tao-Bublak, striving for the podium.

“It was a difficult run, but a beautiful one,” Hernando said after the finish, “Also, it is really hot, so I am very happy that I finished in a good time for my ‘hermanos.’”, the Spanish record winner summed up perfectly the idea behind the team relay race format of the adidas INFINITE TRAILS.

Olson was flying down the race course Not surprisingly, Olson made good use of the lead his team mates gave him and into the 40km/2100vm Loop 3, finishing the race in just over 13 hours, including the joint finish loop. The Alpen Arena at Bad Hofgastein gave the new adidas INFINITE TRAILS world champion a befitting welcome when the US-athlete ran in to meet his team mates who were already lined up to join him for the finish loop through the village center – a moment that literally made shivers run down the spines of the many spectators lined up along the race track to cheer for the new champions.

Kowalczyk who ran a solid race throughout the 40K apparently followed a similar pattern – although Park and Kowalczyk started only 60 seconds apart, the German winner of the 2018 Transgrancanaria Marathon surpassed his Korean colleague ad continuously built on his lead throughout the rest of Loop 3. Finally, he finished on second place with +28,10 Minutes on Olson, with Park being surpassed by the Spanish Ruben Vigil Chacón who therefore claimed the Bronze medal for at the first adidas INFINITE TRAILS World Championships for himself and his Spanish team CARRERASDEMONTANA with mates Manuel Anguita and Raul Criado. The mixed and women´s races for the title are still on-going.