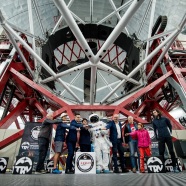 As close to the galaxy as possible. That was the presentation of the tenth edition of the Transvulcania Naviera Armas, at the Grantecan, the biggest infrared optical telescope in the world. Because a galactic race like this could not have any better place for its staging.

There will be more than 3,600 runners from 60 different countries which are going to take part at one of the most special editions in the history of the race. The enthusiasm of the fans is again going to play a huge part in the success of the Transvulcania Naviera Armas.

At the official presentation of the race, the organization of the Transvulcania Naviera Armas counted with the presence of the president of the Cabildo Insular de La Palma, Anselmo Pestana; the sports counsellor of La Palma, Ascensión Rodríguez; the ambassador of Naviera Armas, Héctor Rojas; the director of the Grantecan, Romano Corradi; the responsible of the ISF, Marino Giacometti; and three of the runners that are going to take part at the Transvulcania, the South African Ryan Sandes, the American Cody Reed and the Japanese Yuri Yoshizumi.

The president of the Cabildo de La Palma, Anselmo Pestana, was the first to take the microphone, as he thanked the presence of all his accompanying persons, the support of the sponsors and partners, and everyone who make such an amazing competition possible. He ended up his speech saying that the Transvulcania Naviera Armas is “an honour for La Palma, for the Canary Islands and for the whole country”.

Romano Corradi, director of the Grantecan, mentioned that it is “a pride and a pleasure for us to be part of an edition where the theming is about the space. We just could not miss this edition, because there are also many things that we have in common with the Transvulcania. We are both at a privileged place, La Palma, and many of our researchers will participate or have participated at the Transvulcania at some point”.

Ascensión Rodríguez, the sports counsellor of La Palma, admitted that “the involvement with the Transvulcania is at its highest. Not only the few of us who are now speaking, but the whole team that works behind such an amazing event like this is making an enormous job in order to enjoy the amazing days that are coming”. She also added that “we are extremely happy to have more than 60 different countries represented in the race. We all want to send them all the energy we have and we hope that all of them meet their targets and enjoy the race”.

Marino Giacometti, responsible of the International Skyrunning Federation (ISF), said that “for the organization, the race is expected to be an absolute success in this year’s edition, and that is why we expect that race will improve even more for next year’s edition”.

And last but not least, one of the runners, the South African Ryan Sandes, explained that he is “very excited to be at the Transvulcania again, because it is an amazing race with an amazing route and with amazing fans. It is certainly going to be an incredible experience for all of us”. Sandes is going to compete at the Marathon H10 Hotels, where he will try to win the race, although there are going to be other exceptional runners competing with him for this title.