Zegama Aizkorri is a 42-km/DT5.472m mountain marathon hedl at the Basque village of Zegama in Spain. Kilian Jornet has just won this 2013 Skyrunning world series event  for the sixth time, this year in 3h54m.  Salomon Running teammate Emelie Forsberg took the women´s field in 4h48m.  As it happens every year at Zegama, animation was extraordinary,  with fans cheering on the runners all over the course, from the village to the highest summit. At trailrunningspain.com we were direct witnesses to the race, to bring you this exclusive coverage and photos.

ZEGAMA AIZKORRI 2013: The course and its conditions.

The village of Zegama was mobilized for the 12th year to host the mountain marathon once again included in the Skyrunning World Series. The course spans 42.195 kilometers and 5,472 meters of total altitude difference, and runs through the mountains of the Sierra Aratz and Aizkorri, including four of the highest peaks in the Basque Country & Navarra, all in all putting up a technical and extremely difficult trail to follow.

This year, the sun and warm temperatures welcomed the runners and the many spectators who came to cheer on the athletes, so there was no need to deal with the cold conditions that often prevail in the area. The race started at 9 am in the village of Zegama.See here our exclusive interview for sister website CARRERASDEMONTANA.COM (in spanish, sorry) with RD Ainhoa Txurruka on the evolution of Zegama Aizkorri alpine marathon from 20o2 to 2013.

In a deeply stacked field the first half of the race was fast and furious, with many strong runners out front, only to burn out on the descent behind the more experienced skyrunners. In the end, 97 runners made it to the finish line of this extremely technical alpine marathon below 5 hours, making it the highest level peloton in the Skyrunning series of the whole year and earning themselves the right to come race back here in 2014. 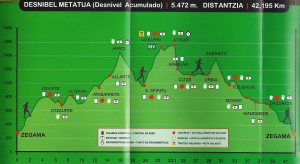 Italy’s Marco De Gasperi from Scott, who has duelled with Jornet on various occasions, today led the race to the 21 km check point, with Jornet pacing him just 1’20” behind. After cancelling his participation due to injury, De Gasperi turned up at the start line with just a few weeks of training to race his sparring partner, at least for half the race, where he dropped out to leave the downhill to Jornet and Hernando.

Jornet, used to running in cold & wet terrains, took advantage of the technical conditions of the circuit, with plenty of mud and even a touch of snow at the summits, to beat second-placed Luis Alberto Hernando from Burgos.

It was no easy task, however: Jornet made it to the Aizkorri summit with a 2 minutes lead, but was pursued all the way to the finish line by a strong descent by Luis Alberto. Kilian achieved victory and fell just 20 seconds short of Rob Jebb’s 2005 record in 3h54’38” and Hernando, glued to his heels, finished only 12” later. Third was an excellent Tadei Pivk (Scott)  in his first international race, closing in 3h59’07”.

KILIAN JORNET race comments: Thus, once again Jornet imposes his leadership on this race, which he has won on six occasions (2007, 2008, 2010, 2011, 2012 and 2013), though he acknowledges that this was the toughest year of all: “The race clock is witness to the struggle we had this year. Luis Alberto made constant attacks throughout the race and I found it difficult to get even a couple of seconds ahead. Until I was close to the very end I was not able to gain the necessary advantage to reach the finishing line before Hernando “. 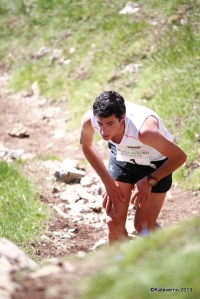 “It was a really tough race competing against Luis Alberto, with whom I fought a neck-and-neck battle until the very end. It was not until just before the finishing line that I managed to get clear of him, and I’m happy with the result. The weather was on our side and many people came to cheer us on, so that made the race more enjoyable and interesting,” declared Jornet after the race.

As mentioned above, Jornet made it to the Aizkorri summit with a 2 minutes lead, but was pursued all the way to the finish line by a strong descent by Luis Alberto. Kilian achieved victory and fell just 20 seconds short of Rob Jebb’s 2005 record in 3h54’38” and Hernando, glued to his heels, finished only 12” later. Third was an excellent Tadei Pivk (Scott)  in his first international race, closing in 3h59’07”.

The intense ladies’ race was led by Stevie Kremer from Colorado, racing her first SkyMarathon attempt. Right at the summit of Aizkorri, Forsberg took over the lead, with Italy’s Silvia Serafini, third, followed by Celine Lafaye and Oihana Kortazar, 2011 world champion and last year’s race winner. 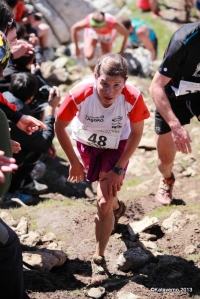 Stevie Kremer arriving at the Aizkorri summit on the lead.

Nuria Picas, 2012 Skyrunner Ultra champion and fresh from her second place at Transvulcania made it 8 minutes behind the leaders at the Aizkorri summit, but then stepped up her pace from 7th position and was finally able to beat Kremer for 2nd place by a tiny 3 seconds. Forsberg closed in 4h48’12”, Picas, second in 4h49’55” and Kremer, third in 4h49’58”. No doubt we’ll be seeing the talented Kremer again on the podium in the rest of the Series, especially after some downhill training. “I loved the uphill”, she said, “but the downhill was so technical. I had a hard time letting loose”.

The next Sky Series challenge in Chamonix on June 30 with the Mont-Blanc Marathon. 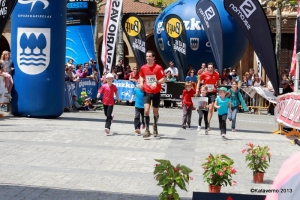 Our specialized trail running photograhy website KATAVERNO.COM covered the race and offers you several hundreds of exclusive photos from some of the most dramatic spots in the race, such as the Aizkorri summit. See below a small sample of it. If you would like to see more of them, click here.

Stevie Kremer arriving at the Aizkorri summit on the lead. 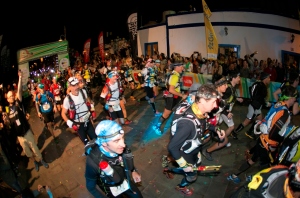