Home » alex txikon » ALEX TXIKON SUMMIT ATTEMPT IN K2 DISMISSED: THE STRONG WIND SLOWS DOWN THE ATTEMPT IN K2 AND THE MOUNTAINEER AND HIS TEAM SET COURSE BACK HOME

ALEX TXIKON SUMMIT ATTEMPT IN K2 DISMISSED: THE STRONG WIND SLOWS DOWN THE ATTEMPT IN K2 AND THE MOUNTAINEER AND HIS TEAM SET COURSE BACK HOME

In our mountaineering section we have been followed the Alex Txikon expedition these days to K2 with no oxigen. Unfortunately and due the strong wind, the team was not able to continue the ascent from 7150 meters. Let’s have a look at the video and see the all the feelings, obstacles and achievements lived in the attempt to summit during these three hard months of expedition.

THE STRONG WIND SLOWS DOWN THE ALEX TXIKON SUMMIT ATTEMPT IN K2 AND THE MOUNTAINEER AND HIS TEAM SET COURSE BACK HOME:

The expedition #WinterTopAppeal of the mountaineer Alex Txikon comes to an end and begins the descent on foot along the Baltoro. After returning from the Nanga Parbat rescue, the Biscayan climber and his team were back at Base Camp from which he made the last attempt at the only eight thousand virgin in winter. However, the strong wind prevented the ascent from 7150 meters. From Camp 3 Alex Txikon recorded and photographed the impressive images that we are sending you. This graphical material serves as accompaniment to the following chronicle in which all the feelings, obstacles and achievements lived in the attempt to summit and during these three hard months of expedition in the winter Karakorum are collected.

K2 FOR NEXT YEAR, INSHALLAH, by Alex Txikon

Finally, I would like to clarify a number of important points:

– Along with the importance of collecting garbage and material from the mountain, I would like to add that in the evacuation of Nuri in the helicopter, due to the freezing of the index finger, we took the opportunity to put 3 bags of recycled garbage in the same helicopter. Many people from Pakistan congratulated us because they said that garbage had never been unloaded in the helicopter.
– The meteorologists have done a magnificent job but K2 does not leave anyone indifferent, as it is difficult to get it right. Therefore, for next year we will place the weather stations in the High Altitude Fields as well as in the Base Camp. This will be one of the first changes or improvements.
– There has been much, perhaps too much, talk of parallel routes or equipment this winter in K2. Although I didn’t want to comment on this subject because we only talked about our work, I would like to point out that this winter only a new line of rope has been equipped. Specifically, from 5,300 meters to 7,150 meters equipping 3,000 meters of rope in 72 meetings of which we have filmed the first 46 meetings in which it can be seen that only one line has been equipped. We have been judged to be competitive without being true. We have followed our ascent by the new line we have created. We had no parallel. Even this has caused problems for our expedition, since the use of old deteriorated ropes has made that they will get involved with our new line and we had difficulties at the time of rappel because we could not do cleaning to guarantee our safety.
– Finally and in my opinion for anyone who wants to try the winter K2: K2 will only be climbed in March and therefore, those who think that the winter ends in February should try in early December or until mid-January. I think that arriving at Base Camp at the beginning of February is enough, since in 3 or 4 days of work you can equip up to Camp 3 and in 6 days of work up to Camp 4. When we arrive home we will make public all the information reflected in our Base Camp weather station that will reinforce our thesis with real data.
– The only possibility will be to leave from Base Camp or Advanced Base Camp to Camp 3, and from Camp 3 to 7,400 meters to summit and return to Camp 3. Or as Reinhold Messner told us several weeks ago, he believes it is possible even from Camp 2. If we soon have the funding we will train and work hard to try from Camp 2, every day I believe more in this theory.
– Hopefully other mountaineers will rely on these initiatives of igloo construction and wind defense. They will hold out until the spring expeditions, and even in summer, if they keep them covered with snow.

Many thanks to all the sponsors who have been part of the history of mountaineering, to all the media who have given voice to this expedition and to all the followers who have lived the expedition every day and at every moment.
Alex. 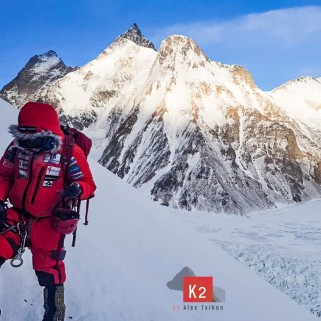 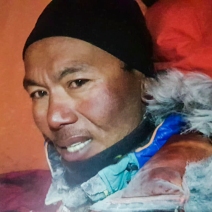 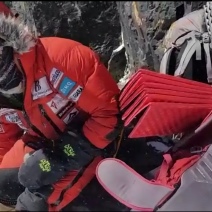 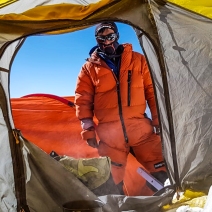 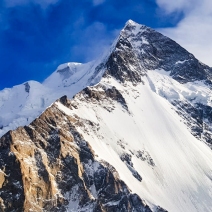 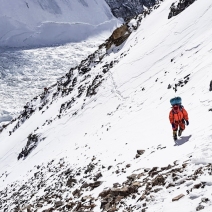 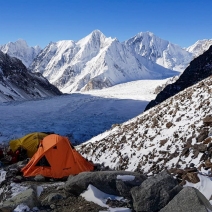 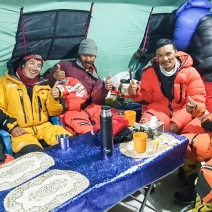