The Golden Trail Series held its fourth stop this weekend at Pikes Peak Marathon in Colorado, where two locals took the gold and two spaniards the silver. Dakota Jones and Megan Kimmel won, with Kimmel setting a new women’s course record of 4:15:04 to break the mark that had stood since 1981 by 14 seconds. Spaniards Oriol Cardona and Laura Orgué took silver, with Darren Beck and Kristina Mascañares claiming bronze.

On a sunny morning that was perfect for racing up to the top of 4,302-meter Pikes Peak and back down to Manitou Springs at 2.000m altitude, the Pikes Peak summit was the halfway mark to climb before going back again all the way down along the same route, following the classic Barr trail. See here how the top7 men hit the summit before we go on to race report, results and photos.

The Pikes Peak Marathon, the fourth stop on the Golden Trail Series, may have featured another world-class field of trail runners from around the globe, but on Sunday it was a couple of Colorado locals who owned the day. Dakota Jones and Megan Kimmel, both residents of the state that straddles the Rocky Mountains, relied on their high-altitude conditioning on a morning that was perfect for racing to the top of 14,115-foot (4,302-meter) Pikes Peak and back down to Manitou Springs. Kimmel (Team Salomon) set a new women’s course record, winning in 4:15:04 to break the mark that had stood since 1981 by 14 seconds.

“I did not expect this, but I didn’t rule it out either, and the main reason I didn’t rule it out was because it’s my home turf and if there is one thing I’m good at, it’s running at altitude,” said Kimmel, who lives about three hours away from the race. “I knew what the record was coming into the race, but I didn’t think it was at all possible with the splits I needed to have. I just kept a healthy pace because I didn’t know who was behind me and I was thinking the record might still be possible. Then, about a mile out, someone said that if I kicked it in, I could get it, so I went all-out.”

Jones, a Team Salomon athlete who has battled injuries for much of the last two seasons, got himself back to full health in recent months with an eye on Pikes Peak and proving he is still among the sport’s elite. The plan came to fruition on Sunday morning. He bested a strong field of international talent to win in 3:32:19. In doing so, Jones ran the fastest downhill time (1:13:53) in the race’s rich 63-year history, one minute and 40 seconds quicker than the previous best descent, recorded in 1993. He did all that after cycling 250 miles over four days from his hometown in Durango, Colorado to Colorado Springs for the race, all in an effort to raise funds for Protect Our Winters..

“It’s the first real competitive race I’ve done in a year and a half and I was curious to see how nervous I’d get before the race because I haven’t raced in a while,” Jones said. “There were a lot of guys capable of winning and I knew I was one of them, but everything has to go right. It always goes right for one person and you hope it’s you.”

Oriol Cardona Coll (Team Dynafit) was 2nd in 3:37:19, Darren Beck Thomas was 3rd in 3:37:34 and Team Salomon’s Stian Angermund-Vik continued his consistent season with a 4th place finish in 3:37:48. With a solid effort in his first trip to the U.S., Angermund-Vik jumped to the top of the Golden Trail Series standings with 238 points in the four races this season.

Jones was with the other eventual top-10 finishers on the ascent and said he felt like he was “falling apart.”

“Running in front of Stian is nerve-wracking because I know what he is capable of and I was running outside of what I know I could do on the way up,” he said. “So I thought: Don’t blow it here and let’s see what I can do. Because it’s such an international field, I’m kind of a local boy even though I’m not from right here in this area. So it’s fun to come out here as a Colorado boy and represent.”

In the midst of what has been a solid but not outstanding season by her own lofty standards, Kimmel got the big result she was hoping for on Sunday. She arrived at the race’s halfway point at the summit looking fresh and strong, and didn’t give the rest of the women a chance to get close from there.

“As far as how I was going to feel coming in, it was a wild card being that I ran (at Sierre-Zinal in Switzerland) last week,” she explained. “I wasn’t sure how to tackle the race itself, except I knew that for me it was important to stay centered and stay in control for the whole course, so I went out at a comfortable pace.” 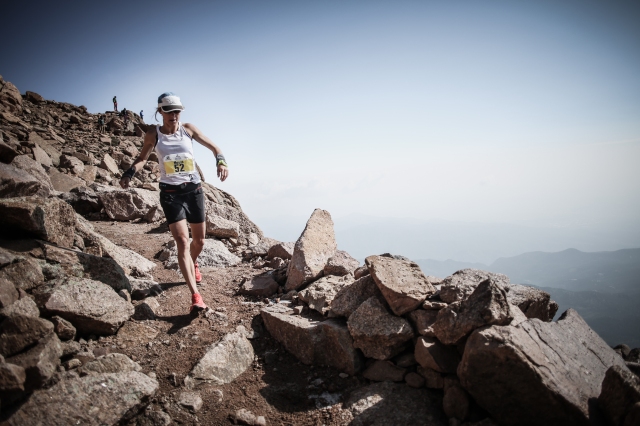 Chasing Kimmel all morning were 2nd place finisher Laura Orgue (Team Salomon) of Spain (4:30:52), Colorado Springs local and defending champion Kristina Marie Mascarenas (3rd in 4:37:00), American Emily Elizabeth Schmitz (4th in 4:44:45) and France’s Celine Lafaye (Team Merrell), who was 5th in 4:51:16. With the win, Kimmel jumped into third place in the season-long Golden Trail Series standings. Mascarenas ran the fastest downhill time ever run by a woman on her way to her 3rd place finish.

“I feel really happy with how I ran Sierre-Zinal and I’m happy with where I’m sitting in the Golden Trail Series and hoping to make the top-10 so I can get out to the Otter Trail (in South Africa),” Kimmel said. “It seems like that will be a really fun course.”

THE GOLDEN TRAIL SERIES: The Golden Trail Series combines five of the most iconic “short-distance” trail races on the planet into a dream tour for both athletes and fans. A €100,000 prize pool will be shared equally among the overall top 10 men & women at a Grand Final at the Otter Trail in South Africa in October. Each of the top 10 will travel with a friend or partner of their choice for the trip of a lifetime to compete for their chosen cause or charity.