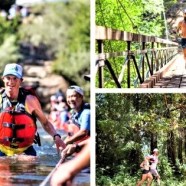 The Western States 100-Mile Endurance Run is the world’s oldest 100-mile trail race. Starting in Squaw Valley, California near the site of the 1960 Winter Olympics and ending 100.2 miles later in Auburn, California, Western States, in the decades since its inception in 1974, has come to represent one of the ultimate endurance tests in the world.

Deep fields for both women’s and men’s race should make for memorable 2018 WSER. The talent level for any year at the Western States Endurance Run is usually exceptional, and the women’s and men’s fields for the 2018 event, scheduled for June 23-24, true to form, will be no exception. See below the fact sheet for the race as summed up by the International Trail Running Association. 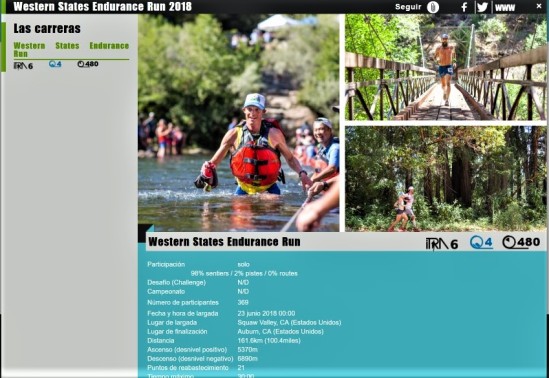 THE ORIGINS:  In 1974, with the inspiration and encouragement of Drucilla Barner, first woman to win the Tevis Cup and Secretary of the WSTF, Tevis veteran Gordy Ainsleigh joined the horses of the Western States Trail Ride to see if he could complete the course on foot. Twenty-three hours and forty-two minutes later Gordy arrived in Auburn, proving that a runner could indeed run the entire trail within the 24-hour time limit of the Tevis Cup – 100 miles in one day.

In 1975, a second runner, Ron Kelley, attempted the same feat, only to withdraw within two miles of the finish with ample time remaining. In 1976, Ken “Cowman” Shirk ran the 100 miles, finishing just 30 minutes over the 24-hour mark.

In 1977, 14 men from four states participated in the 1st official Western States Endurance Run, which was held in conjunction with the Tevis Cup Ride. Runners were monitored by Dr. Bob Lind at the three veterinary stops set up for the horses, and although the race organization transported the entrants gear, runners were responsible for producing all of their own supplies, except water. Three runners finished the course: Andy Gonzales, age 22, in the record-breaking time of 22:57, and Peter Mattei and Ralph Paffenbarger, ages 53 and 54, who tied in 28:36 (and the 30-hour award was born!).

1978 heralded a dramatic increase in both interest and participation in the Western States Run. Culminating a year-long effort by the inspired Gang of Four (Phil Gardner, Mo Livermore, Shannon Weil, and Curt Sproul) to create an independent event, the race took place in June, a month earlier than the Tevis Cup Ride. The event mushroomed to include 21 aid stations and six medical checks, thanks to an ever-growing corps of loyal volunteers and the support of the Placer County Sheriff ‘s Communications Reserve and the Search and Rescue Unit. 63 adventurers ran the race, and the first woman, Pat Smythe, finished in 29:34.

For the last forty years, the race has been enjoying a growing reputation, that was once again highlighted when it was the only USA race to be included as part of the Ultra Trail World Tour, where it remains up to this day. Herebelow you will find the list of champions over these years. 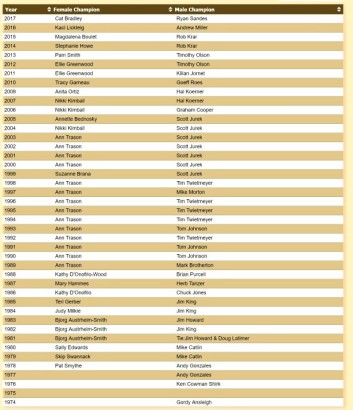 THE COURSE:  The Western States Endurance Run is conducted along the Western States Trail starting at Squaw Valley, California, and ending in Auburn, California, covering a total of 162k/D+5370m. The Run begins at 5:00 a.m. on Saturday of the last full weekend in June at the west end of Squaw Valley. Runners must reach the finish line no later than 10:59:59 a.m. on the following day in order to be eligible for an award. All entrants must strictly adhere to the Performance Rules, Rules for Pacers, Rules for Crews and to the pre-event briefing by Run Management to avoid disqualification and to remain eligible for an award.

The Western States Endurance Run follows the middle portion of the famous Western States Trail, a nationally dedicated recreational trail that stretches from Salt Lake City, Utah, to Sacramento, California. One of the most arduous organized running events in the U.S., the Western States 100 is truly the “Ultimate Challenge” for the long distance runner. Entry in this event should not be taken lightly!

Beginning in Squaw Valley, site of the 1960 Winter Olympic Games, the trail ascends from the valley floor (elevation 6,200 feet) to Emigrant Pass (elevation 8,750 feet), a climb of 2,550 vertical feet in the first 4½ miles. From the pass, following the original trails used by the gold and silver miners of the 1850’s, runners travel west, climbing another 15,540 feet and descending 22,970 feet before reaching Auburn, a small town in the heart of California’s historic gold country. Most of the trail passes through remote and rugged territory.

THE 2018 FAVORITES: Temperatures following a mild spring will test the field of 369 entrants. The National Weather Service is calling for a high of 100 degrees at the finish in Auburn, California on Saturday. Unfortunately, 2017 men’s champion Ryan Sandes and women’s champion Cat Bradley will not be competing this year. On the other hand, this 2018 there are 73 runners from outside the United States who will be competing, which represents approximately 20 percent of all entrants.

On the men’s side, Jim Walmsley, 28, will lead the “Coconino Cowboys,” a group of training partners who all live in Flagstaff, Arizona. Going into this year’s race, five “Cowboys,” including Walmsley, had qualified for Western States through Golden Ticket races. Walmsley was on course record setting pace in 2016 before taking a wrong turn near 90 miles, eventually finishing in 20th place. In 2017, Walmsley again set a torrid pace through a muddy and snowy high country and on through to 62 miles at Foresthill. He later became sick on the way to the Rucky Chucky river crossing near mile 78 and dropped out.

Three of his four “Coconino Cowboy” teammates will also be starting Saturday, including Tim Freriks, 27, who ran away from a strong field at The North Face Endurance Challenge in San Francisco in December.

Walmsley will be challenged by one of the top mountain runners in the world in France’s Francois D’Haene, 31, the 2017 Ultra Tour du Mont Blanc champion; Mark Hammond, 33, of Millcreek, Utah, the third-place finisher at Western States in 2017; Jeff Browning, 46, of Logan, Utah, who has finished third and fourth over the past two years at Western States; Mario Mendoza, 32, of Bend, Oregon, who won February’s Bandera 100K in Texas and was sixth at the World Trail Championships; Norway’s Didrik Hermansen, runner-up in 2016; and Ian Sharman, 37, of Bend, Ore., who will be gunning for his ninth straight top-ten finish.

On the women´s side one of the most intriguing “new faces” at Western States will be Courtney Dauwalter. The 33-year-old school teacher from Golden, Colorado, has taken the ultra running world by storm over the past two years. She ran her way into Western States with a Golden Ticket victory at Southern California’s Sean O’Brien 100K in February. Before that, she notched an outright win at the Moab 240 in October, and previous to that set the American Record for 24 hours in 2017 at the Riverbank One Day Classic. In April, she won the Ultra Trail Mount Fuji 100-miler in Japan.

Top Western States veterans include Kaci Lickteig, 31, the 2016 women’s champion from Omaha, Nebraska, who is rounding into form this spring following her recovery earlier this year from a pelvic stress fracture; 2014 women’s champion Stephanie Violett, 34, of Bend, Ore., who also finished third in 2015; Katlyn Gerbin, 28, of Issaquah, Washington, who finished fourth in 2017; perennial top-ten finisher Aliza Lapierre, 37, of Williston, Vermont; Amanda Basham, 28, of North Logan, Utah, who finished fourth in 2016; New Zealand’s Fiona Hayvice, who finished fifth in 2017; and the ageless Meghan Laws, 57, of Cool, California, ninth in 2017, who will be looking for her 12th Western States finish. Three athletes who qualified via the Ultra Trail World Tour (UTWT), which has partnered with Western States over the past several years to bring more international runners into the race, are 22-year-old Lucy Bartholomew of Australia, Cecilia Flori, 37, an Italian citizen living in New Zealand, and Emilie Lecomte, 39, of France.

The Race Director view:  “It’s been very interesting to watch our elite entrant list develop this spring. The Altra Golden Ticket Series (a series of five races held throughout the country, where the top two finishers gain entry into Western States) has given us some new faces for both the women’s and men’s races. In some ways, the sport feels like it is experiencing a changing of the guard, and we are seeing that through some of our Golden Ticket entries. That said, the new faces are going to be joined by a number of key returning top-ten finishers from 2017, plus some great past champions. Both fields are deep, talented and should be a lot of fun to watch. It’s anybody’s guess who is going to win, whether it’s going to be a runner who is young and inexperienced or older and battle-tested.”

According to the organizers, this 2018 edition will once again be an invitation to travel and to surpass oneself, both for elite runners and amateurs. Much as it happened with its rival the Skyrunnner World Series which came down this year from 23 to 18 races, the UTWT also sizes down this year as its says goodbye  Diagonale des Fous. On the other hand it yet maintains its presence on the five continents where in fact the 2017 calendar is yet to finish. Indeed, the Ultra-Trail Cape Town (South Africa) (December, 2nd 2017) will close the 2017 edition. Andrea Huser and François d’Haene are already sure to win the annual UTWT ranking.

As for the relevance of each race, the same 4 categories will remain with SERIES BONUS at top of the game, followed by SERIES, then PRO and finally least important of all as for the victory raking will be the CHALLENGER. From a spanish perspective it must be noted that both Transgrancanaria and Penyagolosa Trails remain for 2018, albeit the former with SERIES status, while the later is just a CHALLENGER race.