Javi Domínguez Ledo from the Vibram team has wom Tor des Geants 2017 on grand style, setting a new 67h52m record. After Oscar Perez in 2012 and Iker Karrera in 2013,Dominguez is now the third spaniard to win at Courmayeur after completing the gruelling 330k/D+24.000m.

Javi is  best known for his four victories at the Basque Hundred Miles of Ehunmilak, albeit he has also made top5 twice at Chamonix´s Ultra Trail Mont Blanc and is widely regarded as one of the leading ultrarunners of the world when the courses range from hundred miles onwards started racing on trails. 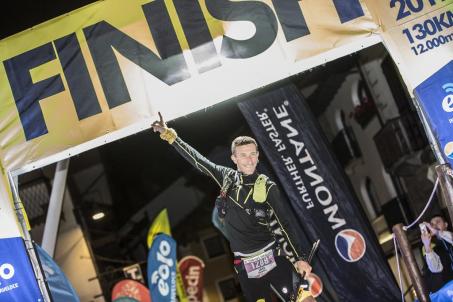 The Iberian trailer has also fixed the new record of “the toughest Endurance Trail in the World.” A definition that may still seem like a slogan to many, but again this year, it have been demonstrated that it is not. Evidence is the tough fight that the Basque athlete had to sustain for more than 300 kilometers with the Italian “colleague” (even in profession) Franco Collè, before Franco decide to withdraw at 22 kilometers from the finish line.

Dominguez did not have an “easy life” even in the final part, the one that from Colle of Malatrà “goes down” to Courmayeur, because followed closely by Oliviero Bosatelli, author of a continuous but not sufficient comeback. For him second place,really close to the leader.

The hardness of the path, which in these first three days of racing has alternated the daytime heat to the frost of the night (hills temperatures even several degrees below zero and strong wind in some stretches) was also underlined also by the 200 withdrawn, on the 875 starters, for muscular or joint problems and intestinal troubles. Among those who are forced to abandon, also several famous names, considered among the favorites or in any case very popular. Names such as Jules
Henri Gabioud, Michele Graglia, Gianluca Galeati, Cristian Caselli, Joe Grant, Enzo Benvenuto, Bruno Brunod, Nico Valsesia, just to name a few.

Javi Dominguez declarations  after the race: It was a dream to come and run the Tor Des Géants, a dream come true! It was an adventure across the beautiful Valle d’Aosta, tough, extremely tough, with plenty of people along the race to encourage us. It was an incredible fight from the very beginning till the end I’m extremely happy for this victory, it’s a great day for me, I can’t wait to celebrate with my super team, the Trailrunning Team Vibram».

← Kilian Jornet is beaten for the first time at UTMB. Came in second to D´Haene after three previous victories Ultra Paine 2017: The race as seen by Casey Morgan, winner 80km. Videointerview and personal race report. →