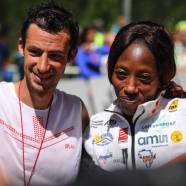 Spaniard Kilian Jornet and Kenyan Lucy Wambui won the 44th edition of the classic Sierre-Zinal, with 4,350 runners enrolled in the race. This mountain race is held in Switzerland over a a 31k/D+2,000m course that stands out for its history, atmosphere and big cash prizes.

Kilian achieved his fifth victory, after 2009, 2010 and the most recent ones of 2014-2015.  Kenyan Lucy Wambui won the women´s rce for the second time, with spaniard Laura Orgué coming in sixth. Here, you will find the information you need about Sierre-zinal 2017.

The Sierre Zinal is a classic sports event held in the Swiss Valais region, linking the towns of Sierre (585m) with Zinal (1685m) by a trail that climbs up to a course summit of 2,425m at Nava, before climbing back down to the finish line.  The race thus adds 31km of course for a cumulative vertical climb of 2,000m and a downhill finish of 800m.

.
SIERRE ZINAL, THE COURSE: The route itself is nicely suited for fast and powerful runners as it lacks significant technical stretches, thus giving rise to beautiful standoffs every year between the pure mountain runners with those talents coming from the track or even orienteering. Thus, it is one of the first trail races where we are seeing great African runners striving for victory year after year

.
The Spaniard Kilian Jornet won this Sierre – Zinal 2017, thus adding the fifth victory in this fastest Swiss race. Kilian Jornet thus equates the record of five victories set by pioneer Mexican Ricardo Mejía, himself a living legend among Skyrunning fans, who was also present in this year´s edition. Let us also remember that Kilian was coming to this 31k swiss race just back from winning at the HardRock hundred miles in Colorado, where he ran a great part of the course with a dislocated shoulder.
.
Victory at Zinal was not easy on him, but finally he crossed the finish line once more as a champion, with a lead of 14 seconds over the Briton Robbie Simpson and 59 seconds over the American Max King. From the start, he took up control of the race his head and by the 2,5 km mark he led the peloton with Robbie Simpson. While passing through Ponchette (1.870m, Km 7.5), he was fourth, just a few seconds back of the leader Geoffrey Gikuni Ndungu within a group of seven units. Kilometers passed in gentle ascents and by Chandolin (2,000m, km 12) the same athletes were still leading, now with Jornet again up front. With 20km already completed, a decisive moment of the race would arrive from Weisshorn (2,337m, km 20): till the race summit at Nava (2.425m) before taking on the final section of descent towards the finish line in Zinal (1,680 M). The Colombian Jose David Cardona opened a gap as he passed through Weisshorn, being trailed just a few seconds from him by Ndungu and Simpson, meanwhile Jornet was pacing himself back 57 seconds behind the leader.
.
Jornet would therefore feel quite fresh to face the last stage and would end up taking the lead in the last segments to arrive as champion once again, among the applause of the numerous public, in 2h33’05 ” and ensuring thus his fifth victory at this Sierre Zinal after those of 2015, 2014, 2010 and 2009. Robbie Simpson was second and Max King third closing the podium. Behind them came the fast Eritrean Petro Mamu in fourth place. Also to be highlighted is the role of the guidance riders, always brilliant in this event and in this edition have been led by the Swiss Matthias Kyburz, who with 2h36m13s arrived just seconds later than Petro.

Declarations Kilian Jornet: “I am very happy with the victory. When I started Mejia was an idol for me and I never imagined that he could match his five victories. The race has been very fast, with the Kenyan Ndungu, with Petro Mamu, with the Colombians and with Rob … On the way up I’ve been with them, then in the plain I got a minute but I’ve always kept the contact and in the part Final, I’ve been going up positions. I passed Rob in the final part. I am very satisfied because it is always a very difficult race. The level is very high and in a year in which I have not run too much and I have done more mountain, I like to see that I can also run fast “
.

The women´s field included the champions from the two previous editions, a duel between the Kenyan Lucy Wambui winner in 2015 and Bavarian Michelle Maier who won in 2016. The race between the favorites fell this time for the African as Lucy Murigi achieved his second victory with 2:58’39 “. Michelle Mayr came in second at 6’31 “and France’s Amadine Ferrato closed the podium with 11’03”. Laura Orgué came here sixth as the first Spanish in the final results

Kilian Jornet has planned relevant activity for this trail running season: After taking some  months to combine several mountain activitities at the Himalayas including his dual Everest ascent, he came back to trail running. He first raced in the Alps, then moved on to the Rockies and now at the Swiss region of Valais. He will now move on back to Mount Blanc and then the Pyrenees, while at the same time taking on some personal pet projects, such as the Bob Graham Round.

Declarations Kilian Jornet: “I like polyvalence, and this season paints very well because we will have a little bit of everything. From the great Everest project to trail races, through personal alpinrunning projects. I’m still motivated like the first day, so I really want to see what will happen this season. I want to wear a bib number again. After Everest I want to see again how my body feels in a mountain race. If everything goes well it can be a very nice year at the level of competition with very emblematic races and I feel like running. In addition to the challenge of the Bob Graham Round Club”

MOUNTAIN RUNING: Kilian will take part at either side of the bib on six races, from Chamonix to Colorado. After Everest, whatever the outcome, Jornet will face a summer full of races. As he explained: “I have never lost the motivation to compete, but it is true that in recent years  other projects had left me little time. Races are a motivation to train and give the best of us in a day, so I plan to participate in some during this summer. ” These are the next races up & coming for his season´s calendar.

PERSONAL PROJECTS: As the third axis of the season, in addition to his great adventure in Everest and the mountain races, KIlian will complete the calendar with some personal projects, derived from this hobby to look for different angles and combine activities of all kinds. We will see this way from an ultra trail route in the purest British tradition.