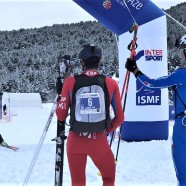 The Skimo World Cup 2017 reached its second leg this weekend at Cambre d’Aze. Indivual and sprint races  will be held at the facilities of the ski resort of Cambre d’Aze on the north side of Puigmal, a familiar territory for much of the spanish team. The individual race of today had Laetitia Rux once again as first woman, while the duel between Kilian Jornet and Damiano Lenzi would lead to the final disqualification of the first three senior men to cross the finish line.

Follow us here to read the full race report, results and photos first, and then let us move on to see the two sides of the argument. First the official statement from ISF and then the lenghty post by Kilian Jornet himself on social networks. 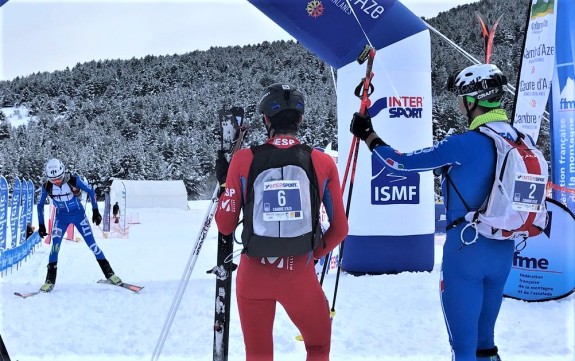 Lenzi and Jornet wait for Eydallin as third to cross line. Photo: ISMF

Cambre D’Aze is the ski resort of the Mediterranean Pyrenees  hosting the second stage of ISMF world Cup stage. An Individual today, to explore the high and the wild of the area, and a Sprint tomorrow to fire up the racers. The Individual today was a big challenge for the organizers, too. The Loc, organizing Committee and the Ffme – French mountaineering federatiom, managed to put down some demanding tracks, dealing with heavy snowfall that had delivered tons of powder along the week and a perfect scenery for the racers: because of the avalanche risk, the organizers decided to keep most of the tracks within the ski resort area. Trees loaded with snow and a cloudy sky, smooth as silk, framed the effort of the athletes who had to face four climbs. Two of them were the same for both men and ladies, then the two tracks divided. In total 1645 D+ for the gentlemen, 145 metres less for the girls. 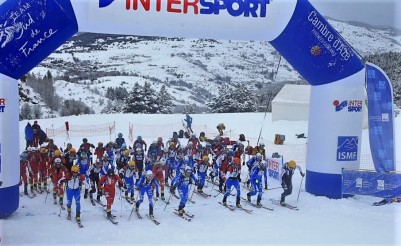 The ladies race was again another magic by Laetitia Roux. According to most of the ladies the key point of the whole track was the biggest ascent with some 700 D+ to be covered in silence and rhythm. There were those who preferred to follow their own pace, and those who feared to be alone up there, losing any comparison with the colleagues. Roux went for it and crossed the line first, followed by the team mate Axelle Mollaret. Third was the Swiss Maude Mathys, back to competitions with a strong confidence, after winning the National champs. 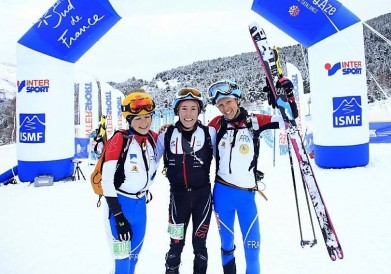 The men´s race saw a very compact group moving towards the firs climb. Soon Kilian Jornet  and a big selection of the Italian team set the pace and went for the lead. Just two seconds separated the Spaniard and the italian Damiano Lenzi, who crossed the line first, followed by Burgada and by the group of Italians, with Matteo Eydallin third, and down the podium, Robert Antonioli and Michele Boscacci. The swiss William Bon Mardion got the 6th position, followed again by the italian Federico Nicolini in 7th. Alexis Sevennec from France, another italian Nadir Maguet and the austrian Christian Hoffman complete the top ten ranking. “Age is just a figure”, said happily and smiling Hoffman. The Austrian, aged 42, was the “wisest” of the chasing pack. 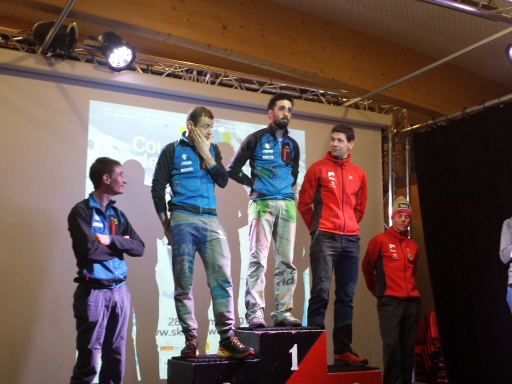 ISMF STATEMENT: At the end of the race, though, Damiano Lenzi was penalized by the ISMF jury for an infraction during the course. Afterwards the three athletes on podium did not present themselves at the flower ceremony. This resulted in a disqualification of all three athletes according to the rules and regulation of ISMF. Subsequently, Robert Antonioli took first place, Michele Boscacci second, both from Italy, and swiss William Bon Mardion, was awarded third place. After this circumnstance, the ISMF will analyze the matter in the constant process of the assesement of the quality of the races. 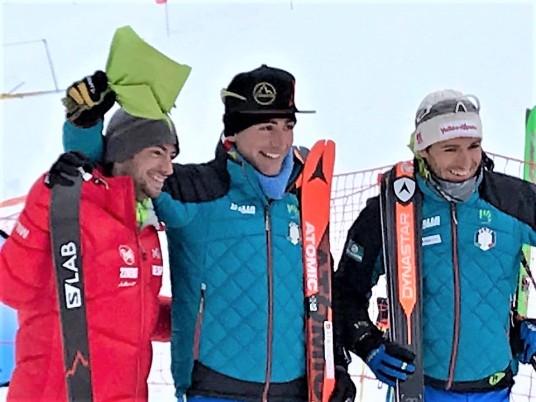 KILIAN JORNET SATEMENT: I want to make an statement of what happen today during the World Cup in Cambre d’Aze and our disqualification.  First of all I want to congratule the organisation of the race in Cambre d’Aze, they did an amazing job to make a great race in a very short time and I want to thank all volunteers and organizers!

Damiano Lenzi and I were fighting all the race and at the last meters he pass me and finish 2 seconds in front. Matteo Eydallin arrives 3rd. In the publication of the results Lenzi had a penalty of 1 minute, becoming 2nd, so me as the winner. The referee tells him it was because he did closed one binding just after the transition area. He said he did not and me and Eydallin trust him, we were discussing that with the referee for long when they did the flower ceremony (by the way it was not at the time of the program) it was not still clear for us so we did not go up.
During the afternoon the Italians show a video of the transition area where we can see Lenzi trying to close the binding before he gets out and checking if it was well closed just after the exit.

Just before the official ceremony, at 17:30, we had a meeting with our coaches, ISMF officials and referee. They said to us that all the 3 (Lenzi, Matteo and me) were disqualified because we did not show up at the flower ceremony. They recognize the penalty it was not a athlete fault and it should’t be a penalty at 1st time, as the video show, but the rules about not showing on flower ceremony are disqualification. They also suggest to us to not make much noise about. I don’t really care about the decision of the disqualification because it was a great race and fight and I have more motivation on some other projects than the final world cup rank, but for other athletes it can cut the motivation to follow the world cup, became world champion.

We accept the disqualification but when some thinks don’t work for long time some moment they need to go public.

Since the priority of ISMF has been to put ski mountaineering in olympics, it looks they have start to construct the house by the roof. Instead of making a more comprehensible and logical sport for the athletes and spectators, more accessible to medias and following the construction of the sport same pace as it gets more professional, we can see now a sport that has been overpassed from nonlogical rules, complicated regulations, shorter and less interesting races for the popular competitors and less communication because the federation sell the image rights to a communication company but not any TV or media want to pay expensive to have images of skimo, so the few minutes we had in skimo before in medias are decreasing.

Since 5-6 years this kind of problems has arrived always in the races when it has been the same referees, In this sport, when the organisations are on a big part volunteers and the conditions in the mountains are challenging and can not been fairly controlled all the way, the mistakes can come from the athletes some times, but some times come because the marking, the organisation mistakes or referee mistakes and some referees have the flexibility ore vision to see if it was an athlete mistake or form another factor. Some not. One of them by the way is working and paid by the FFME (French federation) and international referee at the same time, with some side part decisions.

Athletes train professionally, by passion. Organisations gives always 100% to make a great race. And it can be mistakes, from athletes side or organisation side, but some referees are sometimes really strict to the regulations on some sporting rules, that sometimes, as this case, it was not real, but don’t say nothing about other situations off the regulations that are on their organizing decisions. Only for the example of this week end: The rules said one refreshment on the race, the referee was not on knowledge of this rule and it was the swiss coach who asked in the briefing, at the end it was 2 refreshment points, what it is off rules. The transition platform where Lenzi get the penalty had not a “exit” line. The Open race was time scheduled to colapse with female race. And or the sprints the start time of qualifications is 8AM, when regulations sais the races need to start after 9AM.

.
As athletes we believe in the fair play and if someone need a penalty we are the first to say, but is not logical that referees are putting penalties and changing podiums on many races because mistakes of them or the organisations, markings of the races… when all the athletes (the affected and the competitors) are against.

.
We has been sending our concerns to the ISMF by the regular ways (Athletes committee and national federations since some years and we have get nice words but not any regulations or referee changes, so we think maybe the only way to try to change thinks is to make public our concerns.
Thank you very much for reading that, and anyway, today it was a good, a great fight, a great race and tomorrow it will be more mountains to ski. And if the World Cups continues to this self – destruction way, it will always be great races as Pierra Menta, Mezzalama, Rutor… 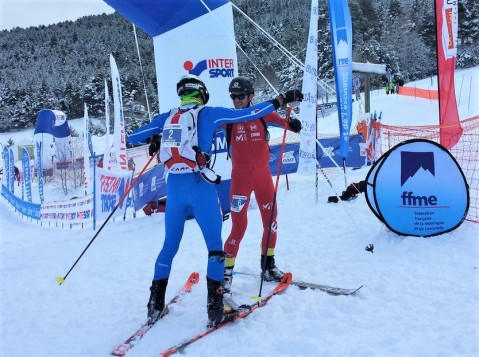 Lenzi & Jornet embrace each other after their duel. Photo: ISMF