Kilian Jornet has new launched his second film, within the scope of the Summits of My Life project.  Having recently become National Geographic´s “Adventurer of the Year 2014” he now shares with us the joys and sorrows of his three mountain speed record attemps in 2013, to Mont Blanc, Matterhorn and Elbrus.

Our team, interviewing Kilian Jornet at Guadarrama National Park, after his records in 2013.

Kilian Jornet released yesterday “Déjame Vivir” (Let Me Live) as the second film of his personal project Summits of My Life. This 62-minute film, once again directed by Seb Montaz, shows the challenges Jornet and his team faced on three mountains around Europe during 2013.

The film, shot in five languages, portrays Kilian Jornet defying his own limits to make a childhood dream come true by following in the footsteps of skyrunning pioneers like Bruno Brunod to become the World Champion.

Déjame Vivir shows attempts to break records on Mont Blanc, the Matterhorn and Mount Elbrus. Intimately portrayed and unveiling the human side, each challenge is also a reflection of the values that sustain the project Summits of My Life. Déjame Vivir is, ultimately, a collage of experiences that allow the viewer to get to know Kilian Jornet and what he does from a much closer viewpoint. 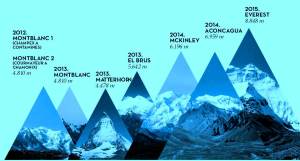 Kilian declared: “Déjame Vivir reflects a way to see the mountains, mine and a group of friends that we like to go explore the mountains in a light and dynamic and where disciplines get mixed and we can either run, ski, climb… The film explains what we do but especially why we do it, and where our motivation came from, going back to the pioneers of this sport. I think it’s a movie where spectators will understand that, at the end, what is important in any project is not the final goal but the way we challenge ourselves to get there”

Film director Seb Montaz explains: “Kilian often sang the song Déjame Vivir during filming. At that time, I did not know what the lyrics meant. But he then explained that the song title meant: “let me live” and I found that had quite a symbolic meaning: one person, Kilian, who wants to be allowed to fulfill his dreams. This is also the underlying philosophy of the project Summits of My Life, and so we thought that was quite appropriate.”

The film will be available for download or purchase on DVD as of today, March 27th at 7 pm on the Summits of My Life website, although the official presentation will take place in the coming months.

DÉJAME VIVIR, A SUMMARY OF THE STORY.

The second year of the Summits of My Life challenges began on Mont Blanc in July, where Jornet managed to break the ascent speed record with a time of 04h57′. As well a sporting success, this story is also a hymn to friendship, as Jornet did not want to attempt the record alone and so he went with his friend Mathéo Jacquemoud. Although the latter suffered a fall during descent and Jornet had to finish the journey alone, he has always stated that it was a joint record. 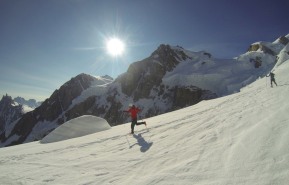 In late August, in pursuit of a childhood dream, Kilian Jornet broke the ascent and descent record on the Matterhorn, in a time of 2h 52′. Bruno Brunod, who held the previous record and had been Jornet’s idol since childhood, also stars in this part of the film. In fact, Déjame Vivir follows in the footsteps of the pioneers of Skyrunning, a group of mountaineers who conceived a different way to approach the mountains: using the minimum of materials with the objective of breaking speed records. Kilian Jornet, together with all those who practice this sport, are the legacy of that generation of mountaineers led by Bruno Brunod and Marino Giacometi, among others. The film is, thus, also a tribute to these pioneers who inspired Jornet. 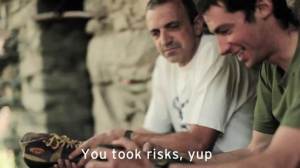 In September, and to put an end to the second year of challenges, Kilian Jornet, Seb Montaz and some members of the technical staff travelled to the Caucasus for a record attempt on Mount Elbrus, the highest mountain in Europe. Following the Elbrus Race, a mythical race that climbs up to the summit at 5,642m, Jornet tried to beat the existing record. Bad weather conditions forced him to abandon without reaching the summit. Undoubtedly, another example of the inner philosophy of Summits of My Life, a project that highlights the idea that the experiences and knowledge acquired along the way are what matters, rather than the actual fulfilment of a goal. 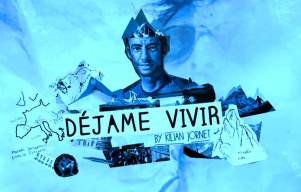 Déjame Vivir puts all these challenges as well as other everyday scenes into images that help us to get to know athlete Kilian Jornet more intimately. Nourished by the feats of past heroes of this sport, Kilian adapts it to our times. A person who asks to be allowed to live according to his own philosophy and values and who surrounds himself by loved ones, not fearing to face upcoming challenges.

Déjame Vivir world premier was aired through an online broadcast yesterday March 27th. This allowed the Project’s worldwide audience to view it simultaneously. So, at 7pm central European time an online connection to the project website was established and Jornet himself presented Déjame Vivir. The official trailer of the film (shown below) was also be broadcast.


Various screenings in different cities will follow, the dates of which are yet to be confirmed. The first one will be in Barcelona sometime in May with a similar format to A Fine Line, which gathered together as many as 1,500 spectators at the Palau de la Música.

Apart from these presentations, the film is now available on DVD or for downloading from the project website. The campaign Friends of Summits of My Life is open to those who identify with the project values and are willing to contribute to it.

← Kilian Jornet designated by National Geographic as Adventurer of the Year. Trail Running Spain: Ultra Pirineu 2014 at Bagá (Catalonia) sold out 100k-42k races as it takes over from Ultra Cavalls del Vent 2013. →