The Andorra Ultra Trail has just welcomed the 2013 Skyrunner world Series as it came to Andorra for the second leg of its Ultra Series, after the Transvulcania held in early May.  Julien Chorier and Francesca Canepa have come out as winners after traversing the more than one hundred miles and 12,200 metres vertical climb that make up Andorra’s Ronda dels Cims. 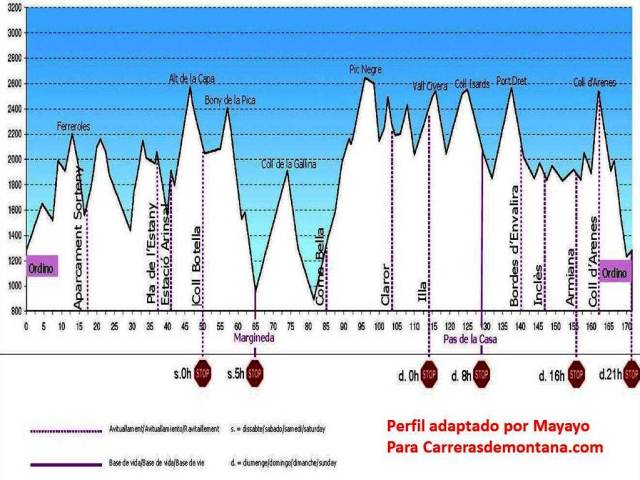 Two hundred and sixty four were finally the mountain runners lined up for the 7am start on Friday, where initially good weather deteriorated in the afternoon.  Nearly 50 km into the race at 2,572m, one of the highest points, swirling mists descended to the haunting sound of a bagpipe…By early evening the sky cleared and, just as programmed, the full moon lit the course.

Recent heavy snowfalls meant the original course with 13,000m vertical climb was modified to ensure the safety of the runners.  Seven extra kilometres were added to “compensate” the reduction in elevation, which in the end represented nearly one and a half times the height of Everest!

Frenchman Chorier (Salomon) crossed the finish line after 28h41’06” hours on the course followed by Kenichi Yamamoto (Houdini) from Japan, in 31h12’00” and Australian Matt Cooper (Salomon), who closed  a close third just twelve minutes later in 31h24’54”. Cooper had led for the first 12 km, with Chorier hot on his heels.  From the town of Ordino, the course initially traversed lush forest and water-logged trail which gave way to an alpine environment with long, steep climbs and short, sharp descents with some snowfields on the upper stretches.

Chorier looked relaxed.  In fact, throughout the entire race he was composed and totally in command – of his performance and the rest of the field. He was pursued by Yamamoto, Cooper, Armando Teixeira, Spaniards Pep Ballester, Aleson Orbegozo and Americans Jared Campbell, Ty Draney and Benjamin Lewis who all finished in the top ten.

The women’s field was led early on by Frenchwoman Emilie Lecomte (Quechua), fifth in Transvulcania, with Nerea Martinez (Salomon Santiveri), who set the  2012 Ronda dels Cims record in 35h31’21’’.

Italy’s Francesca Canepa (Montura-Vibram), second at UTMB and Tor des Geants winner, proceeded with Emilie behind Nerea, at her own pace, focussing on her own race.  At the first big summit 50 km she was on her own in the lead and powered on to finish what she describes as her “hardest race ever”, in 36h18’55”, she placed 16th overall.  Second was Olga Mankò from the Ukraine who closed in 38h19’47” and third, Emilie Lecomte in 39h30’14”, now leadiing the Ultra Series ranking.

The second race in the Ultra race comes to a close:  177 kilometres, 12,200m vertical climb, the Ronda dels Cims counts more than numbers.  The longest day and the night of the full moon create a magical atmosphere that make this race unique race and don’t let’s forget, the world’s toughest 100-miler.