Trail running in Spain is widely popular these days, and keeps growing rapidly.  Partly because of the superb mountains spread all over the country, partly because of the spanish elite runners success all over the world. But mostly, this mountain running boom in Spain has to do with the great atmosphere that newcomers and middle  of the pack runners find when joining the sport. Yes, mountain races are tough competitions were every one strives to outpace fellow runners, yet there is often much companionship in them, as this  video and photogallery from Transgrancanaria 119k 2013 edition -ran under 12 hours of nonstop rain- demonstrates

Transgrancanaria 2013 (see our full race report here) was once again a tough race, won by Sebastien Chaigneau and Nerea Martinez after enduring terrible weather conditions that resulted in many of the  favorites dropping off, including big names such as Miguel Heras, Aitor leal and the like. Yet the race was also one of the clearest displays of what ultra trails have to offer in terms of competing to your best while sharing you love of the trails with fellow runners, be it the elite or the pack runners.

As for the elite, runners coming in positions 3-4-5  (Yeray Duran, Zigor Iturrieta and Santiago Obaya) to the finish line gave a fine example of it. First, Zigor came across rival Aitor Leal lost in the forests due to headligh misfunction and slowed his pace to tow him him on back to the race all the way to a chekpoint where he could replace the lamp and come back full steam. Then, over 80km to the finish line, Yeray, Zigor and Santi exchanged positions once and again while fighting for the podium while keeping themselves together whenever possible and trying to work it out faster as a group than they would as runners thinking exclusively of outpacing competitors. In the end, Santi and Zigor tricked Yeray and slowed down deliberately to allow the local runner  to come in 3rd across the finish line.

If this was the spirit among top runners, the same is even more true of the pack runners and -in such a terrible day with 12 hours of rain included- of their enthusiastic crews and public who suppported and cheered the runners on through night, fog and thunderstom as it was. This video by the crew of local runner Manuel Lobelle, who ended up in #106 after 22h11m is sure a great testimony the shared joy of that atmosphere, overcoming all odds. 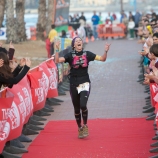 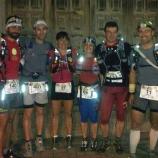 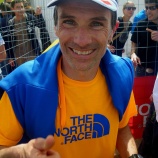 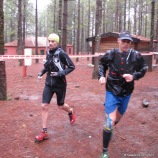 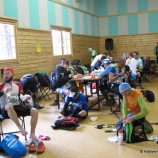