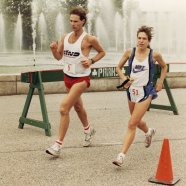 WOMEN WHO RUN MORE THAN MEN: 13 Overall female victories. Our running stories section focuses on something that should no longer surprise anyone: An ultraruning race in which the first person to cross the finish line is a woman.
Ruth Croft won the Tarawera Ultramarathon last Saturday. Today, as a tribute to these great women ultrarunners, we summarize up the 13 overall female victories in big dates: From Ann Trason’s 1989 24H USA National Championship to the Swiss Iron trail by Denise Zimmerman in 2014. And many more…

WOMEN WHO RUN MORE THAN MEN:
13 OVERALLFEMALE VICTORIES, BY MAYAYO

In recent months, the series “Lady’s Gambit” swept through the world audience. It was a fantasy inspired in the trajectory by changing sex of the chess genius Bobby Fischer. Thus, we were able to enjoy a magnificent television series where a young woman of exceptional talent beat the great masters of chess.

Now, whatever Netflix says, whether for physiological reasons, for emotional reasons, the fact is that ultrarunning racing is now the sport in which the highest female performance is closer to the male. And often, they get over it. Interestingly, chess is today the competition where both sexes have a greater difference in the performance of the elite. But anyway… what a magnificent performance that of Anya Taylor-Joy, even if she doesn’t have the greatest sporting credibility.

LET’S GO WITH THE REALITY, THIS ONE, OF THE VICTORIES IN THE WOMEN’S ULTRA-BACKGROUND.

A series of achievements that have been repeated in tartan, asphalt or mountain throughout history. So much so that from 1989 to 2021 we have collected here 13 aboverall women’s golds with a special meanings. Will you come with us? We’re going to travel from today to the past, on a countdown.

Ann signed three more silvers, which could have changed history